That Was The Week That Was

Posted on December 17, 2012 by Simon Richardson 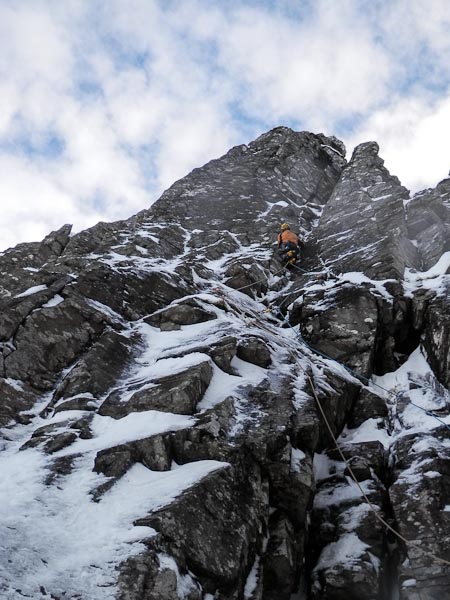 Last week (December 10-14) was undoubtedly the week of the winter so far. Heavy snowfall was consolidated by a mini-thaw the previous weekend followed by stable cold weather with no wind and blue skies.

Several of the major events have already been reported on scottishwinter.com – Guy Robertson and Greg Boswell’s first ascent of the Vapouriser (VIII,9) on Creag an Dubh Loch, Martin Moran and Pete Macpherson’s third ascent of Steeple (IX,9) on the Shelter Stone and Andy Nisbet and Brain Davison’s good run of new routes in Glen Coe and An Teallach.

The Cuillin Ridge came into good conditions and four teams made the winter traverse. Both Scott Kirkhope and Ken Applegate and John Orr and Ronnie made a traditional outing with a bivouac, whilst the Fort William-based team of Guy Steven, Donald King, Kenny Grant and Duncan made a lightning-quick traverse in only 12 hours. This is very respectable time for a summer ascent and the team was aided by King’s intimate knowledge of the route. All these ascents were widely reported on various blogs and Twitter, but more impressive perhaps was a solo traverse by Barry Smyth with one bivouac. The Cuillin Ridge has been traversed in winter solo before, but to do it mid-winter with precious little daylight and long nights takes a very special resolve.

Dave Almond had a good run of routes with Helen Rennard. They started off with The Secret/Cornucopia Combination (VII,8) on Ben Nevis, followed by Tyrannosaur (VI,7) on Lost Valley Buttress in Glen Coe. On their third day they climbed Sidewinder (VII,8) on the Ben and finished off their four-day spell with an early repeat of Tuberculosis (VI,7) on Stob Coire an Lochan. Dave then teamed up with Guy Steven and Blair Fyffe to climb Sticil Face (V,6) on the Shelter Stone with the Direct Finish.