Posted on December 9, 2012 by Simon Richardson 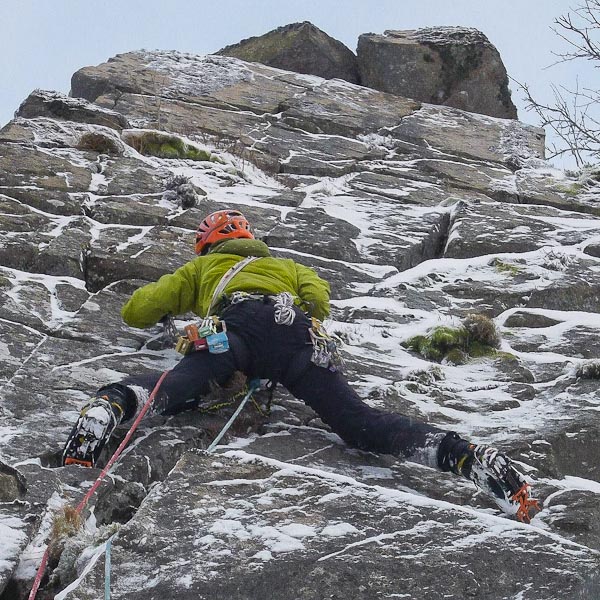 Craig Lamb on the first ascent of The Gravestone (VI,6) on Clais Rathadan on Lochnagar. This cliff is situated in a hidden gorge to the left of the approach track and is home to two existing routes – Easy Gully (II) and Nae Soup (III,4) – both climbed in March 2001. (Photo Findlay Cranston)

Craig Lamb and Findlay Cranston made a good addition to Clais Rathadan on December 5, with the first ascent of The Gravestone (VI,6). This little cliff makes a good fall back option of the weather is too wild higher up in the main North-East Coire of Lochnagar.

“I kicked off my season by plodding into Lochnagar and getting blown back half way up to the Meikle Pap,” Craig told me. “As a result we ended up heading to the wee gorge in the northern tributary of the Allt na Giubhsaich, just off of the land rover track. Been in once before, some good short routes, 30m high, and a good option if the weather is poor up on Lochnagar. We climbed a new route on the ‘stand out’ buttress come slab at the southern end of the gorge. It followed the series of crack lines up the centre of the buttress, steep but on good hooks, before traversing right to an awkward mantle onto a wobbly boulder ledge. From there you step up and traverse left to finish up the steep twin cracks before pulling through a boulder roof. Unfortunately I ran out of quickdraws so had to exit right and was unable to finish up the twin crack, however Findlay Cranston directly up the cracks on second, and they provided and brilliant finish up the plum line on the slab.