Posted on December 8, 2012 by Simon Richardson 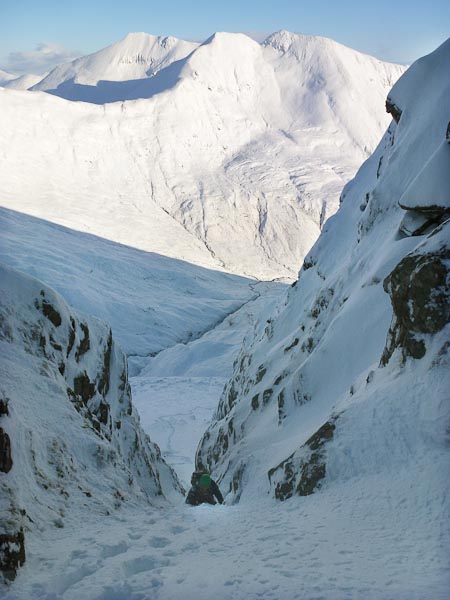 Duncan Tunstall on the first ascent of Redbreast Gully (III) on Am Bodach in the Mamores. Note the deep snow conditions on both the approach and the route with Na Gruagaichean and Binnein Mor looking magnificent in the background! (Photo Andy Nisbet)

Andy Nisbet climbed a couple of new routes on Am Bodach on December 2 – South Buttress (II/III) and Old Man’s Ridge (III). He returned on December 5 with Duncan Tunstall to add another route to the crag. Here is his story:

“The Old Man’s Crag – Not me, but the Old Man called Am Bodach. Who says there aren’t any unclimbed easy gullies, or that they’re all remote or low level? Duncan Tunstall and I found one in the accessible Mamores yesterday. The walk is short but didn’t feel it, as fresh snow on Monday had doubled the approach time from Sunday when I had last been there. Not that even Sunday was easy but I was going light after the SMC dinner.

Two years ago I had visited the cliff just as a short day before the SMC AGM and been pleasantly surprised as to how big it was considering the small write-up in the Ben Nevis guide. I guessed that being loose and vegetated, also in west coast territory, was the reason why the buttresses hadn’t been climbed but the one I did seemed to me like a good natural line to an east coaster. As I walked down, I spotted a separate buttress to the left of the main cliff, and this seemed worth a return on a day without partners. Hence the visit on Sunday although I’d seen the buttress from the best angle and what looked like a well defined ridge was only so on the side I was viewing. Still, a deep groove on its right side gave a nice start although the ice was closer to slush and retreating would have been harder than carrying on. Still, I could imagine it full of neve and a grade easier than the III gave it. I couldn’t think of a good name so South Buttress will have to do.

But a ridge just across an easy gully to the right and at the left end of the main crag, looked and proved much better. So I descended the easy gully and started up a steep wall of turf followed by a lovely sharp ridge. Then to my surprise it petered out into slopes and I realised I wasn’t on the ridge at all. So I walked across to the true start and things began to pick up. It would have been a real classic if all the pinnacles on the crest were inescapable but again there was easier ground on the left. But I took in most of them, and a short hard wall, which was inescapable, halfway up. Old Man’s Ridge (Grade III) was definitely worth doing.

I couldn’t help noticing that the ridge dropped away into a well-defined gully, but I was tired and it wasn’t gully-climbing conditions that day. Duncan phoned on the Tuesday. I had just been up north, wading around in deep sticky sludge without even setting foot on the intended route, so when he was in the south where one could hope for better conditions, and an easier route seemed to fit my tired legs, that gully came to mind much earlier than I’d expected. It must have snowed a lot on the Monday because the walk-in took over 3 hours and it isn’t even that far. We weren’t encouraged by thigh deep snow on the approach to the gully but once we got into it via a tricky bulge of thin ice, the snow was only knee deep. And fortunately safe as it had fallen sticky and the temperature then dropped. Not that you didn’t sink right in, but it all seemed very stable. There was an overhang of icicles halfway up but my assumption that you could bypass it on the right proved correct, although the turf was quite steep. It finished on the south ridge of Am Bodach at about 950m but the ridge crest hadn’t blown clear as we’d hoped. Duncan was still keen enough to bag the Munro but I broke trail down the way. It seemed fair enough when he done most of the work upwards. The hungry robin at Mamore Lodge was waiting for us, so we rewarded his patience with some biscuits while in return, he suggested a route name – Redbreast Gully, 180m Grade III.”

Postscript December 10: Soon after I posted the above I received an email from Al Halewood.

“Hi Simon. Saw your post on this crag. My wife Jane and I did a route here when we lived in Kinlochleven back in 2006. We did a ridge that appeared quite distinct from the floor of the main bowl and was to the left of main crag. I noted it as Grade II/III and about 100m (the last is a bit of a scribble in my diary). We were going to call it The Dark Toon (after Kinlochleven). Don’t know how that fits with what Andy did… so many crags to go back to!”

It turns out that Al and Jane did indeed make the first ascent of Andy’s ‘South Buttress’ which has now been renamed ‘The Dark Toon’.