A Sniff of Winter 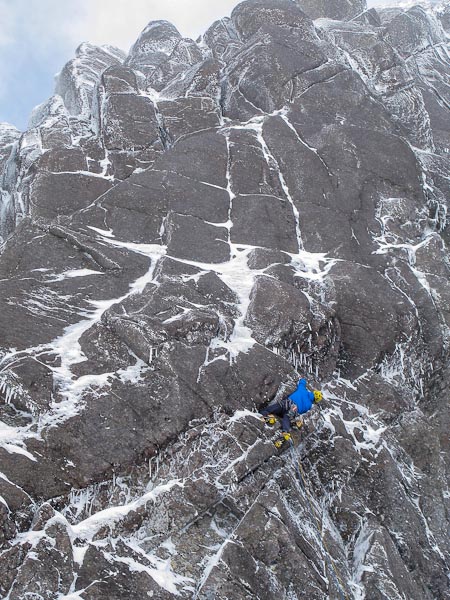 Almost without fail there is a cold snap at the end of every winter season. This year, the length and severity of it has come as a bit of a shock, especially after the warm weather at the end of March, but there is no question that we are back in winter mode again, with blizzards and sub zero temperatures on the mountains.

Like many folk, I’d put away my winter gear for the season but Guy Robertson persuaded me to dig it out again for a route in the Cairngorms. Piotr Wisthal (aka ‘Polish Pete’) joined us too, and after running through various options we decided to visit Beinn a’Bhuird on Sunday April 15. At this time of year it is important to select a cliff that is north-facing, because the sun rises high in the sky and quickly strips other aspects. We had plans in Garbh Choire, but walking in we quickly realised that the strong dry northerlies would have blown the fresh snow away from this exposed cliff, so after passing under a bare-looking Coire na Ciche we changed venue to Coire an Dubh Lochain.

Here our efforts were rewarded. The deep semi-circular corrie bowl cuts deep into the plateau and had retained sizeable quantities of old snow as well as collecting fresh windblown powder. As we made our way up Main Rake, Bloodhound Buttress looked attractively wintry and we settled on trying a winter ascent of Sniffer Buttress, which was first climbed at HVS 5b by Andy Nisbet and Neil Spink in June 1978. It is a fine feature, but I doubt it has ever been repeated in summer as the guidebook dismisses it as a poor climb

Guy made a powerful lead of the guarding entry wall but was unable to find a belay below the next section – a pair of twin cracks. With no other option, he carried on only to find that the cracks were rounded seams, with few positive holds and limited protection. Guy placed a couple of runners, launched up the left-hand crack and made a bold mantelshelf onto a sloping edge. Fully committed, he was hoping for better cracks above, but the rounded seam continued. In an a remarkable display of composure and determination, Guy eventually found a Pecker placement in the right hand crack which gave him the confidence to make another thin sequence of moves to reach Thank God turf and a good ledge.

An overhanging offwidth hung above us. It didn’t look too difficult from afar, but as I climbed into it I quickly realised that I was too broad to squeeze into it and was completely flummoxed how to proceed. Slithering back down the crack I realised that a long reach to a patch of turf would allow me to swing up the wall to its left. It was a short lead but it opened the way to a turfy slab leading up into the exit gully. As I emerged on the plateau, the sun broke through the clouds lighting up the Cairngorms massif stretched out in front. Looking down the cliff from this point on the plateau in the past I’d always wondered about the origin of this exit gully so prominently positioned between Main Rake and Tantalus Gully. Now I knew that it stemmed from a hairline crack in a rounded seam a third of the way up the buttress.

Guy and Pete came up, we shook hands and slapped backs (it was Pete’s second only winter route), before starting the long return over A’Chioch, down Glen Quoich and into the Fairy Glen. We finally reached the cars nearly 15 hours after leaving them earlier in the morning. It had been a long and satisfying day.