Sixteen Years then Two Come at Once! 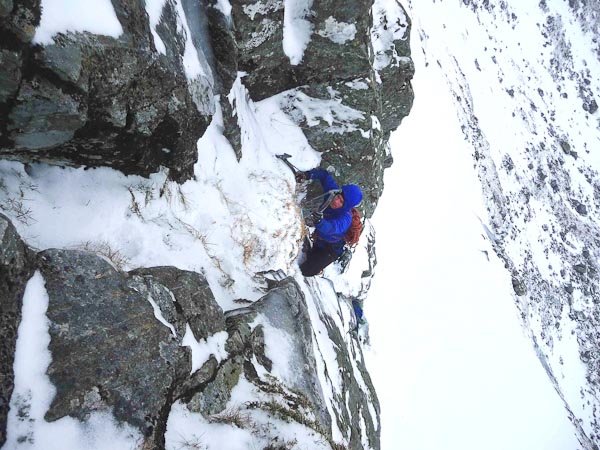 Looking down to Dave McGimpsey on the first ascent of Raeburn’s Edge (III) on the South Buttress of Garbh Choire on Ben Alder. After sixteen year’s of solitude, this remote crag saw two independent visits from separate teams over the space of two days. (Photo Andy Nisbet)

When Andy Nisbet visited Ben Alder with Dave McGimpsey and Duncan Tunstall on Monday January 16, they were surprised to find steps from the day before leading up Ben Alder Diamond. Andy takes up the story:

“Funnily enough, my mind had been on the South Buttress of Garbh Choire on Ben Alder since 1996 when Brian Davison and I walked past it. I told Brian it was a big unclimbed cliff, so with better eyesight than me, he asked who were the two people climbing on it! Bass and Yearsley of course. We had climbed a couple of new routes on the Enigmatic Buttress, then bagged the Munro (although Brian walked round it on principle) and were heading down into the Garbh Choire to look for something else. Time was getting on so an easy gully on Garbh Choire Beag was planned. This was Scotland’s least visited area by climbers, so we couldn’t believe seeing another three climbers heading straight for our gully. We were warmed up so a mad rush got us there first. It turned out they were going for the buttress right of our gully, and they were mates anyway. So seven new winter routes were done on a single day on Ben Alder; I think more than doubling the number for the previous 100 years.

I’ve been back to Ben Alder many times since then, but always when there was no snow low down. Two days previously Braeriach was in good nick but Ben Alder was left for a couple of days’ extra freeze. Dave McGimpsey was fresh back from work in Poland and after his first route of the winter, while Duncan Tunstall had been similarly inspired by Braeriach. Our tactics are older fashioned so we started cycling at 8am when it was properly light and reached the crag about 4hrs later. There were occasional footprints heading in the direction of the crag and we did have a discussion about why walkers would be going up Ben Alder that way. The snow was hard and icy so no more prints were seen until we found a cut stance in the snow at the base of the cliff. To be honest, we were more amused than annoyed that Simon and Roger had beaten us by a day, when no-one else had been to the crag for 16 years. We knew it was them; no-one else walks that far on a Sunday. Also time was getting on and their line looked tricky, so we took the easy option and climbed the lower angled rib to the right of Raeburn’s Gully. It had a tricky start and occasional hard moves, so ended up as an easy III; Raeburn’s Edge seemed as good a name as any. Its best feature was that it was surprisingly long, and even discounting the lower tier, the 200m given to Raeburn’s Gully felt quite modest.

As we returned to the cliff base, Dave and I felt it was a long way to come for one climb and the urge to try another obvious line overtook common sense. The gully bounding the right side of the buttress looked fine except for a steep band which had a steep icicle formation, clearly climbable but late in the day and without ice screws, we gambled on an easier option and headed up into the gully. A big ice bulge blocked our view but once bridging over it, things looked more hopeful, as well as a prefect thread runner in what was generally unhelpful rock. The icicle was the main flow but there was enough ice to jink left and back right to gain a V-groove which would have been easy had it not been full of unconsolidated snow. Still, we did out best to speed up it and get back to the rucksacks with just over an hour of daylight left. High Jinks (IV,4) seemed a good name.

It was very gloomy when we reached the bikes but a bit of urgency overcame our caution. My bike is not exactly top of the range and we were going pretty fast over frozen bumps, so it was showing signs of wear when we reached the main track. I rushed on to Ben Alder Lodge in fading (faded would be more accurate) light and stopped to get my torch out. Just as I realized my front wheel was loose, the torch went out and Dave disappeared along the track. I had this feeling it wasn’t my lucky day but then I could just about make out the track, so tried a short cycle and despite wobbling around with the loose wheel, it was better than walking. I had in the past cycled off the road in darkness and been lucky to get away with only a small but permanent lump in my shoulder, so I was nervous and walked some dark bits in the trees. But I was only half an hour later than the others and despite Dalwhinnie not having a pub, it was one of the best days of the winter.”