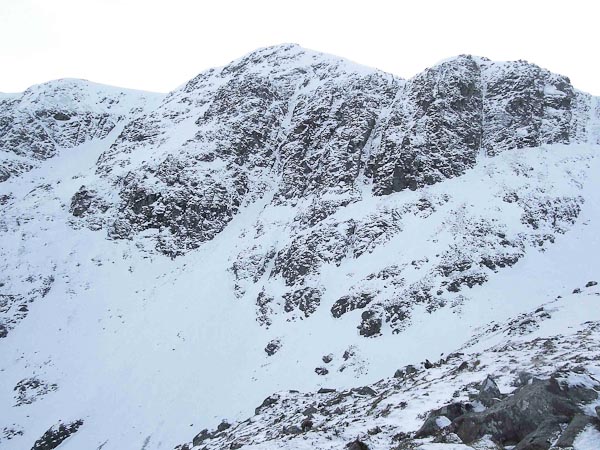 The North-East Coire of Beinn an Dothaidh. In the top left corner, the higher crag is split from the lower one, by a left slanting gully. Consolation Corner (IV,5) takes the faint corner that can be seen at one o'clock, running up the centre of the higher crag. (Photo Andy Nisbet)

Erick Baillot and Stuart McFarlane visited Beinn and Dothaidh on Sunday January 15. “Turf conditions were amazing and the cliff was icy,” Stuart told me. “Now all the main crag needs is a dump of snow!”

But instead of climbing on the main cliff, Stuart and Erick headed high up and left where there are another two smaller crags separated by an easy snow gully. The first crag is broken by a large terrace, with a rock tower above, and the second has a prominent corner running up the centre.

“When we looked up from the car park, the base of these small crags is higher than the top of West Buttress, which would explain why they were slightly hoared from Saturday’s south-west wind,” Stuart explained. “Clearly they deserved some attention, so we climbed the prominent corner on the second crag on ice, turf with some helpful neve.”

After emailing various Southern Highlands aficionados, the conclusion was that these crags were indeed unclimbed (although the central snow gully is known to have had ascents), and the result of Stuart and Erick’s exploration was the first ascent of the fine two-pitch Consolation Corner (IV,5).

Simon Richardson is a passionate Scottish winter climber
View all posts by Simon Richardson →
This entry was posted in New Routes and tagged Beinn an Dothaidh, Erick Baillot, Stuart MacFarlane. Bookmark the permalink.