Posted on February 22, 2011 by Simon Richardson 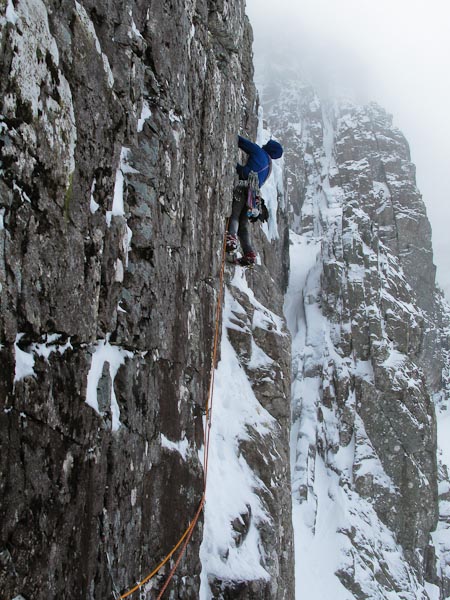 Iain Small pulling into the bulging crack-line on the third pitch of Brave New World (IX,8) on Ben Nevis during the first ascent. This four-pitch route lies between Kellett’s North Wall Route and The Past is Close Behind on the North Wall of Carn Dearg. (Photo Simon Richardson)

The weather forecast for last weekend was terrible, but as the week progressed climbing on Sunday began to look a possibility. Iain Small and I hummed and hawed about where to go, trying to balance avalanche risk and high winds. In the end Iain suggested we visit Ben Nevis and climb on the North Wall of Carn Dearg.

When Iain made the first ascent of The Past is Close Behind (VIII,8) last season with Blair Fyffe, he noted that there was a direct line up the vertical walls to the left. So at 8.00 am on Sunday February 20, we uncoiled our ropes below the first pitch. The initial wall and impending ramp was far harder than it looked, but fortunately the second pitch up the chimney of Macphee’s Route (which is normally climbed in descent) was easy enough. The third pitch took another tapering ramp leading to a bulging crack-line and corner that led through the awkward third tier.

By the time we reached the Diagonal Terrace it was 3pm. We already had two pitches of technical 8 below us and were level with the top of the difficulties of Kellett’s North Wall Route, but above us loomed the vertical fourth tier.

I struggled to make out a clear line up this imposing 35m-high wall. The lower third was cut by a deep overhanging corner, but this ended at a prominent overhanging niche that defended an apparently crack-less impending headwall. Iain was undeterred, and he racked up with quiet confidence. The corner was hard, the placements were sparse, but slowly he made upward progress.

Iain then went out of sight for nearly an hour. Eventually the rope began to pay out and I looked up to see him under the metre-wide roof with the ropes hanging free below him. With no runner in sight he shouted, “Watch me!” I couldn’t bear to watch as he slowly pulled on to the impending headwall.

The puzzle of the headwall took another 45 minutes to solve. There were no obvious crack systems, and Iain tried straight up, left and right, vainly searching for a the combination of placements that would take him into the finishing grove. As twilight fell there was a whoop of delight as a hard move right led to a hidden hook and the certainty of success.

I followed in the gloom an arrived gasping on the finishing snow slope. Iain’s performance had been a privilege to watch. I’ve climbed with many outstanding winter climbers over the years, but never before had I seen anyone tackle such a sustained, difficult and blind pitch, completely on sight, with no idea on whether the line would go or whether it was possible to protect.

Iain suggested we call the route Brave New World after the Aldous Huxley novel. “It sits well with other route names,” he explained. “Huxley was a pacifist, like Kellett (although not a conscientious objector as he was medically unfit for military service). It’s a nice foil to Past is Close Behind and also another book title to go with The Cone Gatherers.”

We were unsure of the grade but eventually settled on IX,8. For me, Iain’s lead of top pitch captures the very essence of the modern Scottish winter game  – climbing into the unknown on a steep, technical and challenging line. A Brave New World indeed!