Posted on February 24, 2011 by Simon Richardson 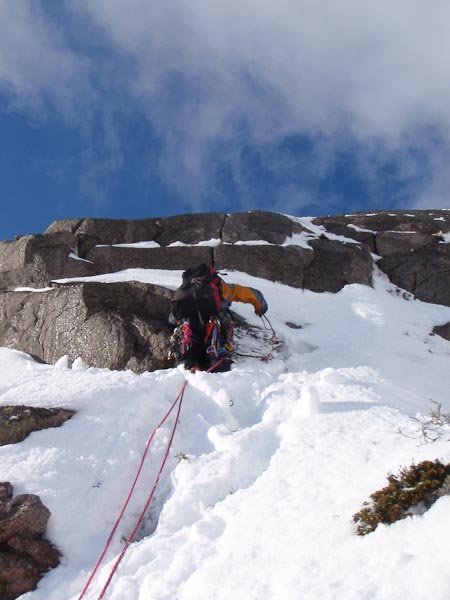 Every so often I receive an email from Martin Holland letting me know about his recent explorations. These are often in the Southern Highlands, and although not often in the highest grades, Martin’s choices are often well chosen and in venues a little off the beaten track.

Taking advantage of the strong southerly winds last week, Martin was one of the first to realise that Stag Rocks on Cairngorm would be a good and safe venue. On Thursday February 17 he visited the Cascade area with Ali Cashman and climbed a new 140m-long line up the buttress between The Accidental Tourist and Truly, Madly, Chimbley.

“It’s not a major route,” Martin explained, “but the first two pitches had interest. The first was particularly worthwhile and following a natural line. It was climbed mostly on ice, snow and frozen turf with the odd rock move. It felt quite bold in places on the day as the ice and snow was quite cruddy and soft, but I’ve graded it assuming good ice in the groove.”

They called their route Truly Accidental (III,4). Martin did not let on whether they actually meant to go that way, but mistake or not, its nice to see a medium grade route being added to a reasonably accessible area such as Stag Rocks. It just goes to show that the Cairngorms are far from being worked out!

One Response to Truly Accidental