Posted on February 16, 2011 by Simon Richardson 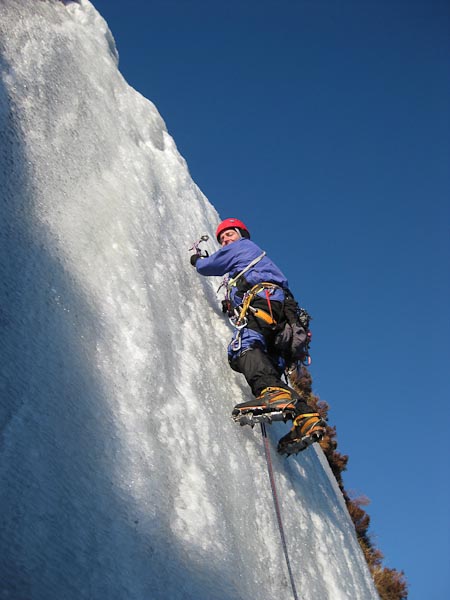 Colin Hossack on the crux pitch of Smear Test (IV), Clints of the Spout, Cairnsmore of Fleet, Galloway Hills. This excellent three-pitch route had not been climbed since its first ascent by Doug Scott and Stephen Reid in 1997. (Photo John Biggar)

It was a busy time for ice climbers in Galloway and Borders over the Christmas period. Local guru, Stephen Reid, recently contacted me with details of December’s winter climbing activity in the Galloway hills.

“The season started off very well,” Stephen told me, “with classic climbs like Dow Spout (II/III) on Craignaw, The Black Gutter (III) on the Merrick and the Grey Mare’s Tail (III/IV) near Moffat all receiving ascents in December.

Andrew Fraser and Ian Magill added two short mixed lines to the right-hand side of the Black Gairy of the Merrick, Tae a Moose (III) and A Fridge Too Far (III). Most notable was the second ascent of the rarely formed Smear Test (IV) on Cairnsmore of Fleet by John and Linda Biggar and Colin Hossack on Christmas Eve. The same team also made the first ascent of Mulled Wine (III) a line of ice smears to its right. The three pitch icefall of Smear Test was first climbed by Stephen Reid and Doug Scott in 1997 and is not thought to have formed properly since, though when it does, it gives an excellent climb as the second ascensonists attested.

The neighbouring unrepeated gully of The Spout of the Clints (V, Reid and Chris Bonington, 1997) looked to be in excellent condition too but none of them were allowed out climbing on Christmas Day and by Boxing Day it had all melted, though enough of it refroze for Fraser and Magill to stick Fridge Magnate (III) onto the North-East Coirre of Milldown in early January.”