Free Ranging on The Ben

Posted on February 14, 2011 by Simon Richardson 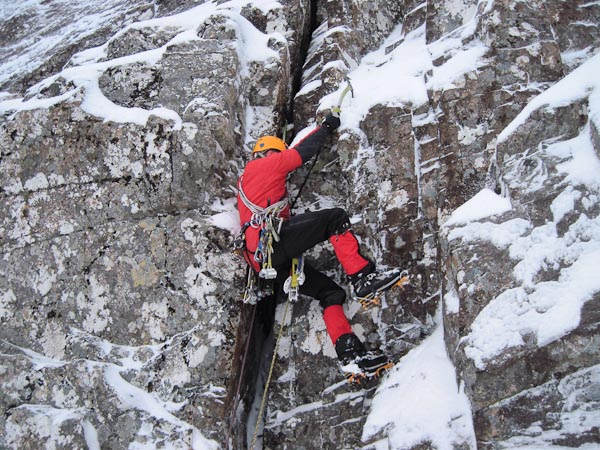 Simon Yearsley making the difficult initial moves on the first ascent of Free Range (VII,7/8) on Number Five Gully Buttress on Ben Nevis. The character and quality of climbing was compared to the Tower Face of the Comb. (Photo Malcolm Bass)

On Saturday February 12, Malcolm Bass, Simon Yearsley and Jim Higgins made a winter ascent approximating to the summer VS Chicken Run (first climbed by Jimmy Marshall and James Stenhouse in May 1961) on Number Five Gully Buttress. Free Range (VII,7/8) is one of the few winter routes to venture onto the south-east face of Number Five Gully Buttress. Malcolm takes up the story:

“I think all Scottish new routers dream of doing a new winter line on The Ben. Simon Yearsley and I finally got our opportunity yesterday. We’d noticed that the snowy weather had been coming in from the South-East so, along with Jim Higgins, we went up to Number Five Gully Buttress intent on the front face of the buttress right of Slanting Slit. Luckily things had gone to plan and the buttress was good and wintery.

We started up the ‘nasty crack’ of Chicken Run (tasty in winter), climbed a more direct variant of the summer route’s second pitch to the great flake, and then broke up and right up a superb pitch of steep corners, narrow chimneys, and exposed ledges. As Jim said “it was as good as you get anywhere”. We all agreed it was one of the best mixed pitches any of us had climbed. The style is best described as ‘hard traditional’, full body contact sport in torrents of spindrift. An innocuous looking wall above turned out to be horribly awkward, and then a last blast up a groove in the darkness to the top of the buttress.

Descending Ledge Route we watched clouds of moon lit spindrift flying from the top of Orion Face, and our hearts went out to the owners of the head torches there, who still had a long way to go. The route 140m-long and either hard VII, 7 or VII, 8 – we’re yet to reach a consensus.”