Posted on February 17, 2011 by Simon Richardson 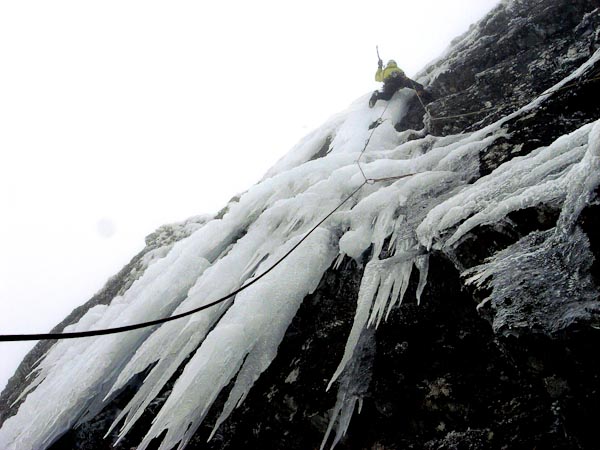 Donnie O’Sullivan climbing the crucial second pitch of Special Delivery (VI,6) on Creag Meagaidh. The cascade is unlikely to completely touch down, but icy mixed climbing, which may not be visible from the corrie floor, allows the icefall to be gained with suprising ease. (Photo Pete Davies Collection)

On Saturday February 12, Pete Davies, Donnie O’Sullivan and Mike Gardner made a superb addition to the Post Face on Creag Meagaidh. Special Delivery (VI,6) takes the prominent icefall above Staghorn Gully, which doesn’t completely touch down and is approximately 50m to the right of last year’s new addition Postal Strike. There were two long pitches of ice climbing – one to reach the base of the main cascade, the cascade itself which was the crux, and then two easy pitches to reach the plateau.

“It’s a definite three star route,” Pete told me. “I’m really pleased as I’d not had a chance to climb on the Post Face before. I saw the line in long distance photos and was intrigued as to why it wasn’t in the guide and finally got round to going and having a look. Think we got quite lucky with conditions as pretty much the entire route was climbed on ice, even the crux mixed section to gain the main icefall had blobs of really well bonded thin ice. Might be a bit trickier without these. I lead the first pitch up to the base of the main cascade, which fell to Donnie who dispatched it in fine style and then Mike led pitch 3. The fourth was easy ground.”