Posted on February 9, 2011 by Simon Richardson 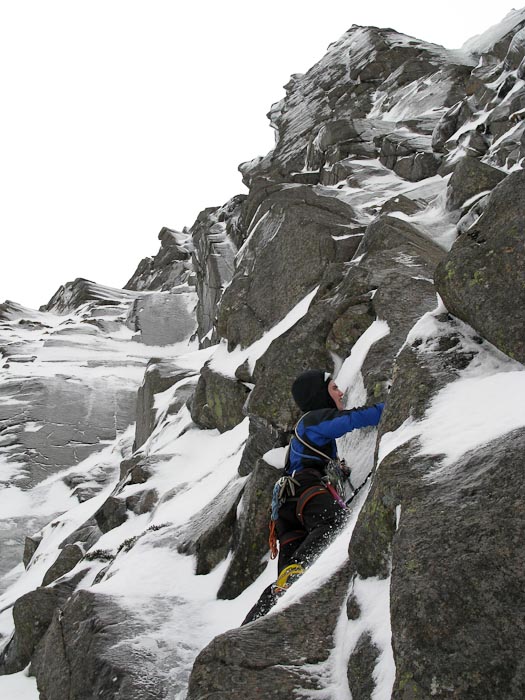 Sandy Simpson on the first ascent of Eagle-Eye (VII,6) on Eagle Buttress, Lochnagar. The icy grooves on the right lead up to the menacing headwall of Where Eagles Dare (VII,8). Eagle Groove (IV,5) climbs the prominent icy corner on the left before trending left to join Eagle Ridge. The crux corner of Eagle-Eye can be seen up and left of centre, just right of a clean-cut vertical arete. (Photo Simon Richardson)

With a strong westerly forecast, Lochnagar was the obvious choice for Sunday February 6. The avalanche report was a little circumspect, but Sandy Simpson and I were confident that Saturday’s re-freeze would have firmed up Friday’s brief thaw. In the event, the approach paths were very icy, the main coire was very white and the snow from last week’s storms was beginning to consolidate. By the time we arrived at the first aid box, there was a team starting up Parallel Gully A, Matt Spenceley and Helen Rennard were climbing Parallel Buttress, and another pair making their way towards Polyphemus.

We were headed for the Eagle Buttress headwall to climb the line of grooves to the left of Where Eagles Dare. I had spotted the line when I climbed WED with Guy Robertson five winters ago and had been meaning to return ever since. We knew we had a lot of ground to cover, so we raced up the lower three pitches of Eagle Buttress and belayed where it became steep.

The first hard pitch was deceptively awkward, steeper than it looked, and difficult to protect with icy cracks and verglas. Sandy belayed below the vertical corner that was clearly going to be the crux of the route. Tenuous bridging, limited pro, screaming calves and biceps and a double surge of adrenaline led to an exposed stance by the headwall. We had reached an impasse and thought we were going to fail on the final pitch, but just as the shadows began to lengthen across the coire, we found a way through the bulging grooves above that opened the way to a ramp leading the crest of the buttress and an easy romp to the top.

The crux corner of Eagle-Eye was technical 7 on the day, but conditions were a little unhelpful, so VII,6 better represents the experience. I was anticipating a more mellow mountaineering outing, but as Sandy reflected afterwards, one of the attractions of travelling new ground is that you never quite know what to expect!