Posted on February 12, 2011 by Simon Richardson 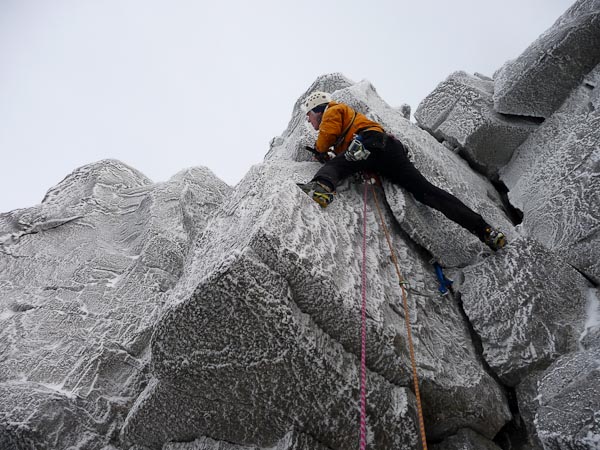 Jonathan Preston on the first winter ascent of Flake City (V,7), on the Far West Wall of Coire Mhic Fhearchair on Beinn Eighe. This season, Andy Nisbet has added five new routes to the Far West Wall, which makes a fine companion to the nearby Fuselage Wall, for high quality mixed routes. (Photo Andy Nisbet)

Throughout the winter, Andy Nisbet has been quietly developing the mixed climbing potential of the Far West Wall on Beinn Eighe. Andy takes up the story:

“I couldn’t help noticing this wall from Fuselage Wall, but I used to think it a bit scrappy and Fuselage Wall had more lines to do. But of course they began to run out so I took a wander underneath. You can only see the first 30m, then the angle eases, but I was quite impressed by soaring corner and crack-lines. Actually too impressed as they looked smooth and hard, but when James Edwards climbed a route on the right edge of the buttress (Chocks Away – V,6) in late 2009, it was time to have a look. Under the wall on my own in September, my intention was to solo James’s line, but I hadn’t realised it started lower down and couldn’t fit the description. So I picked a line on the right, one which looked good climbing and which I might just be able to solo. And I got a bit scared but Flake City (Hard Severe) was born. It seemed like it should go in winter and had no vegetation, so a good early season choice.

Sure enough, I was back in November with James Edwards and Colin Wells but good winter plans are flexible. Teams of three are sociable and less to carry, but actually they both e-mailed within an hour and said they might be free. The approach, abseiling from the propeller, means you traverse under the whole crag and of course we were distracted by something in the centre of the crag and which looked reasonable. I wasn’t really sure where the original winter line (Far West Buttress – V,6, 1991) went, but this line didn’t have any left traverses. It had a harder section than expected but the climbing was good – Chock-a-Block (V,6). James thought IV,6 as it was very safe but I found hanging on and placing gear was a bit much for IV.

The following day with a different team, John Lyall and Jonathan Preston, we didn’t even get as far along the cliff as my tired legs spotted an easier line. We ran up this (Westlife IV,5) and the others wanted to do a second route. So Jonathan suggested a steep crack-line nearby (Chalice V,6). I thought it would sort out his enthusiasm but it turned out to be brilliantly helpful and gave a great pitch. John also pointed out where the original Far West Buttress (V,6), climbed by himself and Steve Aisthorpe in 1991, actually went.

It was now obvious that the big but unlikely corner line to its right might go. So I was back ten days later with Jonathan and Sandy Allan. This turned out to be distinctly fierce high up and I was forced right round a corner to below an overhanging leaning corner. Jonathan dealt with this with runners above his head all the way, leading to an easier finish (Crackhead V,6).

So Flake City was left, and left because there was too much snow on the walk-in, until early February. Jonathan and I tackled what turned out to be the hardest (just) of the lines. The initial corner was sustained but fine until the angle reared out beyond the vertical. Some wild moves, but helpful and safe as ever, led out to the arete and the world’s best thread runner. Now thin moves up a crack leading nowhere turned into a big flake and it was suddenly all over. An easier pitch led to the top crack with a bizarre jutting flake. But the crack was undercut and off-width and rejected climbers. But Jonathan outwitted it by sneaking in from the right in the way only Beinn Eighe rock would let you. Jonathan was so careful with the flake, not even touching it to start but then standing on it. I just made a big leap and hung on it. Flake City – V,7.

I’ve no idea about stars. I was very cautious with small Fuselage Wall but folk seemed to like it. This wall is less continuous but the main pitch of each is great climbing up a well-defined feature. We’ll just have to see if anyone else goes, and then if they like it.”