Mixing It Up in Coire Scamadal

Posted on December 22, 2010 by Simon Richardson 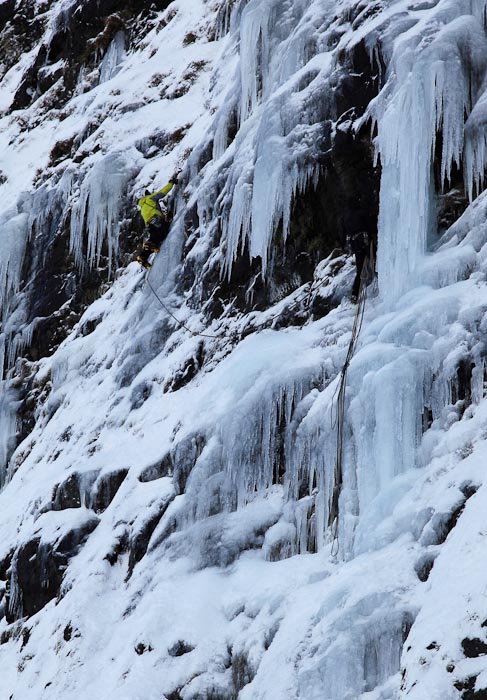 Doug Hawthorne and Ewen Todd on the first ascent of Greymane Wall (V,4), Coire Scamadal, Skye. The pair were intending to climb the vertical icicle on the right of the photo, but since they were belayed to it, they chose a less direct line to the left. (Photo Colin Threlfall)

Some late news – during the first cold spell in early December, Doug Hawthorne made a couple of productive visits to Coire Scamadal on The Storr on Skye. The potential of Coire Scamadal as an ice climbing venue was first noticed by Mike Lates, and during January last year it was developed with some of the finest ice routes in the British Isles.

Doug kicked off this season’s campaign with a repeat ascent of Scamtastic (V,5) with Robin Clothier and then returned with Ewen Todd on Wednesday December 8 to climb the steep ice left of Silverpine. The ice ran out halfway up the face and the pair continued to the top via two pitches of tenuous mixed climbing.

“Greymane Wall at V,4 may be a bit of a sandbag from what I could see,” Mike Lates told me. Certainly this is the first route in the coire to venture away from the security of the steep ice lines. It will be interesting to see as Coire Scamadal is further developed, whether it remains a pure ice venue, or starts to offer steep mixed routes as well.