Posted on December 23, 2010 by Simon Richardson 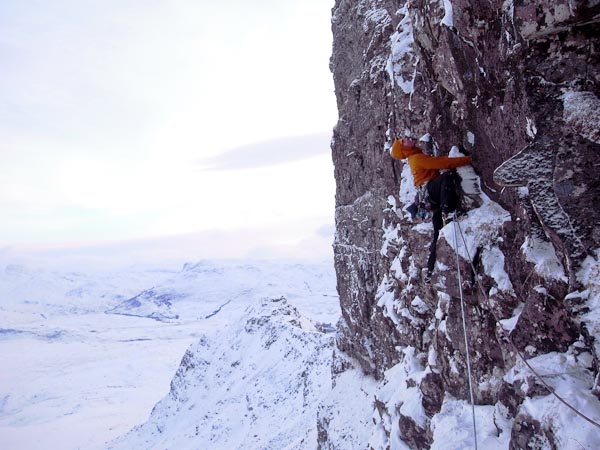 Jon Bracey on the third ascent of The Godfather (VIII,8). This touchstone route, first climbed by Martin Moran and Paul Tattersall in March 2002, is one of the most revered routes in the Northern Highlands. (Photo Rich Cross)

Rich Cross and Jon Bracey made a lightning visit to the Highlands last weekend and came away with ascents of Central Buttress on Stob Core nan Lochan and Messiah above Bridge of Orchy. On Sunday December 19, they made the third ascent of The Godfather on Beinn Bhan.

“The Godfather is class, a really brilliant journey,” Rich told me “Our ascent was not without incident as I broke the handle off my axe on the second pitch – we considered going down but days like that don’t come around very often, so we managed to press on seconding with the stump. An amazing day with light winds and almost blue skies, but really cold!”

The Godfather is acquiring a reputation for giving parties a rough ride. On the first ascent, Martin and Paul had a torrid time climbing with a failing head torch, and a near miss second attempt resulted in a badly damaged ankle and an epic retreat. These big North-West routes don’t come easy!