Posted on December 19, 2010 by Simon Richardson 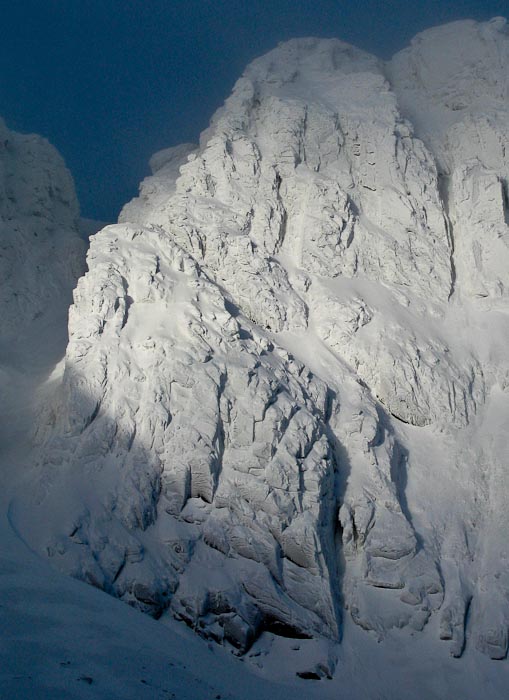 Lochnagar's Black Spout Buttress with shadowed couloir of The Main Branch of The Black Spout to the left. The classic Black Spout Buttress takes the easiest line connecting the two snowfields right of the crest on the lower tier. The prominent right-facing corners of Isis and Western Slant can be seen to the right. (Archive Photo Simon Richardson)

On Wednesday December 15, Dave Almond, Duncan Tunstall and Greg Parsons made a direct ascent of the classic Black Spout Buttress on Lochnagar.

Rather than follow the standard line, the trio followed a more direct version of the lower tier before continuing directly up the crest on the upper tier. The upper section approximates to the direct version of the summer route which has been followed on numerous occasions in winter. The lower section however, followed the groove to the left of the normal winter line, and the resulting route was an enjoyable V,6 excursion.

The lower section may have been climbed before in winter, as until recently, it was not common to record such variations. The lines on the lower tier can be picked out on the photo above. The sunlit left edge leading to the flat platform at half-height is Black Velvet (V,7). Black Spout Buttress (III,5) climbs diagonally rightwards up the the lower shadowed snowfield and continues up the short chimney leading to the centre of the snowfield highlighted by the sun. The groove system climbed on December 15 takes the curving groove between Black Velvet and Black Spout Buttress and arrives at the left side of the sunny snowfield.

If anyone has climbed the lower tier this way before, please add a comment or drop me an email.