Toughing It Out on Lochnagar

Posted on December 18, 2010 by Simon Richardson 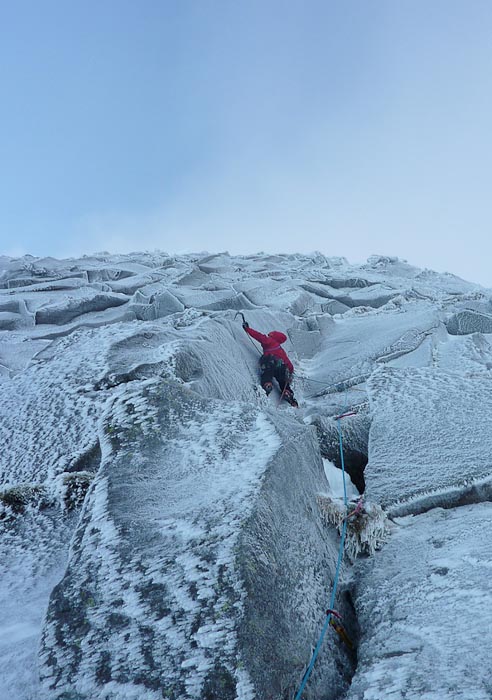 Ross Hewitt on the second pitch of Tough Guy (VII,7) on the Tough-Brown Face, Lochnagar. The route was first climbed in winter by the legendary team of Andy Nisbet and Colin MacLean in December 1984. It has seen few repeats and a number of strong teams have been defeated by long reaches between turf and the deceptively rounded nature of Lochnagar cracks. (Photo Sandy Simpson)

On Wednesday December 15, Ross Hewitt and Sandy Simpson made a rare repeat of Tough Guy on Lochangar. The pair attempted this sought-after mixed line on the Tough-Brown face the previous Sunday, but after a late start they ran out of time.

“Ross was halfway into the crux but there was a bold and committing section coming up so he downclimbed and we abbed off as it was completely dark,” Sandy explained. “We went in on Wednesday for first light and we got up the first two pitches quickly with Ross doing the leading to keep up the speed. It was heavily verglassed, the crux moves are pretty thin with very little for the feet and long stretches on little pieces of turf. Overall it’s a stunning route and a magnificent cliff to climb on!”

For lovers of climbing trivia, Tough Guy took its name from Guy Muhlemann who made the first summer ascent with Rob Archbold in May 1980. The SMC do not allow eponymous route names a rule, but this one somehow slipped past the eagle eyes of the New Routes Editor!

Simon Richardson is a passionate Scottish winter climber
View all posts by Simon Richardson →
This entry was posted in Repeats and tagged Lochnagar, Ross Hewitt, Sandy Simpson. Bookmark the permalink.

3 Responses to Toughing It Out on Lochnagar