The Wizard of Oz

Posted on December 13, 2010 by Simon Richardson 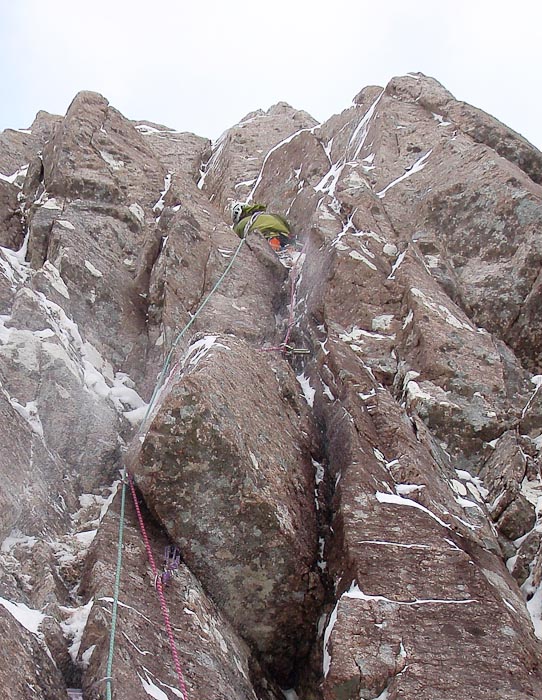 Winter wizard, Andy Nisbet, just above the tricky crux bulge on the first winter ascent of Oz (VII,7) on the West Face of Aonach Dubh. “It's hard for first ascensionists to give stars but it felt pretty good to me," Andy said afterwards. (Photo Sandy Allan)

Last week, Sandy Allan, John Lyall, Andy Nisbet had a couple of productive days climbing on No.2 Buttress on the West Face of Aonach Dubh in Glen Coe.

On December 7 they added a new climb approximating to the summer line of Rose Late (IV,6). “This was a nice easier route,” Andy told me. “The wide crack [of the summer route] looks fierce but was shorter than it looked. Also a perfect crack on the wall to the left appeared out of nowhere under the snow when we cleared it (the wide crack was too wide for gear).”

The following day (8 December) the trio returned to make the first winter ascent of Oz (VII,7). This turned out to be a far sterner affair, with Andy, the grand wizard of Scottish winter climbing, leading the crucial first pitch. “The technical crux was probably a bulge starting up the main groove after the step right,” Andy explained. “Here were two poor pegs and a big cam in an icy crack – just enough to allow me to commit. A corner near the top of the route looked very smooth, but under the snow were wee nicks for the feet and good torques that seemed too far apart – but by then you’re giving it a go, and it works!”