Posted on December 3, 2010 by Simon Richardson 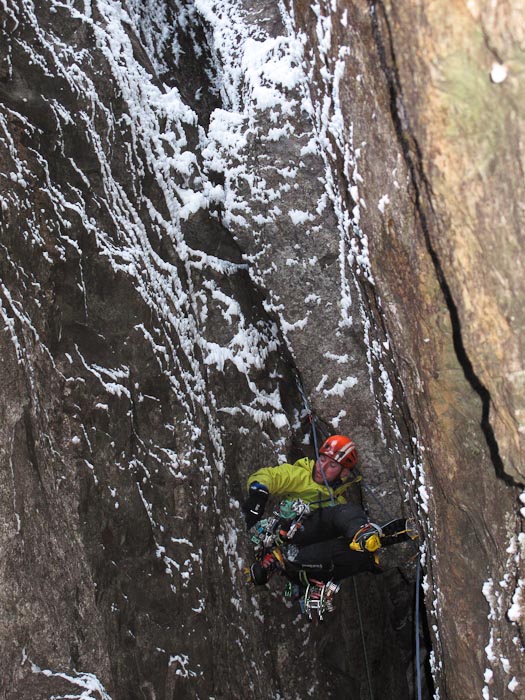 Yesterday (December 2), Pete Macpherson, Martin Moran and Francis Blunt made the first winter ascent of Shadbolt’s Chimney on the Bhasteir Tooth on Skye. This 50m-high fierce slit on the north face of the Tooth was first climbed by Shadbolt and MacLaren in 1906 via a ‘tortuous through route.’ In 1932 Tarbuck and Colin found the Outside Variation which avoids some of the back and footing deep in the bowels of the chimney.

“I have to say its the weirdest route I have ever climbed,” Pete told me. “The chimney disappears right into the back of the tooth where a through route leads out to the other side. I chose to head out the other way [the Outside Variation] towards the light. This involved extreme chimney/caving out under a 8-10 metre roof before heading up into the upper squeeze chimney. It involved the strangest of contortions and a massive rack of 16ft slings and cams up to size 6! Getting gear in was desperate as I could hardy move without getting jammed or tangled in the rope!. Its almost impossible to grade however VI/VII,7 with a pinch of salt is about right.”