Posted on December 11, 2020 by Simon Richardson 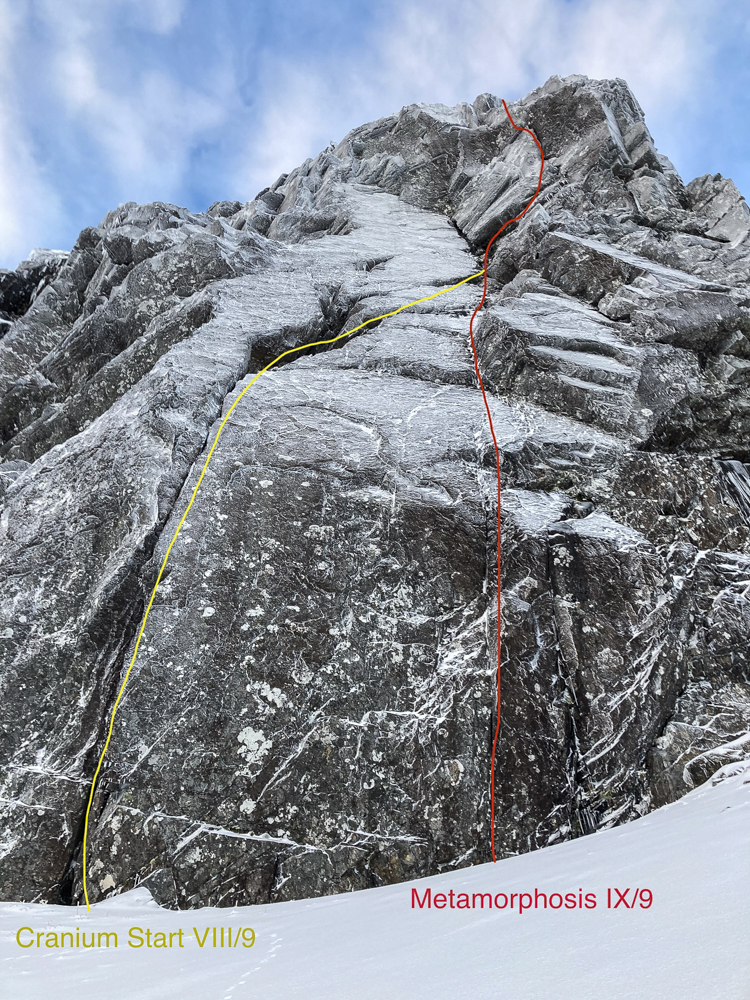 Central Trident Buttress on Ben Nevis showing the line of Metamorphosis (IX,9) climbed by Tim Miller and Jamie Skelton. The original VIII,9 version of the route via the Cranium Crack is shown in the left. (Topo Tim Miller)

Tim Miller and Jamie Skelton notched up the first new Grade IX of the season when they made the first complete ascent of Metamorphosis on Ben Nevis. This sustained summer E2 was first climbed in winter by Iain Small and Gareth Hughes in March 2009 and graded VIII,9. They took the natural winter start up the deep crack of Cranium (an E1 alternative start to Heidanger) before moving right to join Metamorphosis after its first summer pitch. Climbed on sight, this was an inspirational lead by Iain Small, and years ahead of its time.

Tim and Jamie thought the route was unclimbed in winter when they set off from the valley early on December 7. “Just by chance we met Iain Small and Dave MacLeod when walking up Ben Nevis on Monday, ” Tim explained. “We found out that Iain had climbed Metamorphosis via the Cranium start in 2009 with Gareth Hughes. Not too disheartened we thought we would try the original summer line.

It has a steep start which involved some hand jams followed by a good rest, then a a few steep but positive hooks. After this the route breaks onto a blank slab where all the hooks are very thin and it continues like that into the corner above which is the crux and slightly run out. We then belayed on a big ledge and climbed up the steep flake pitch, as already climbed by Iain and Gareth. Then a shorter easier pitch to the top.

In total we only added an extra pitch of climbing, but it took us a lot of effort over three visits and consumed most of the past week for us. Monday and Tuesday we took turns inching a little higher each time before pinging off and swapping leads until Jamie managed to get us to the top of the pitch with a few falls. We had a rest day on Wednesday and then came back yesterday (December 10). This time we knew where the gear went and where some of the crucial hooks were. After both popping off on a few attempts I miraculously managed to climb the pitch clean to the top. Jamie then made a very impressive on-sight of the second flake pitch.

Despite having limited experience climbing Grade IX, we found it considerably harder than any other winter routes we have tried and we thought it justified the IX,9 grade.“