Posted on November 30, 2010 by Simon Richardson 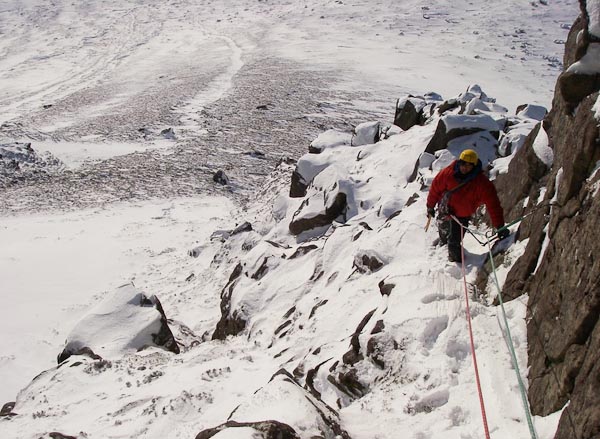 Roger Webb and James Edwards braved the snow-strewn roads north of Ullapool on Sunday November 28 and made a winter ascent of the summer HVS Enigma Grooves on Stac Pollaidh.

After a gruelling approach through thigh-deep snow, they followed the summer route to beneath the direct finish, and then moved left to join the final pitch of Party on the Patio. The crux was the wide chimney-crack on pitch 2, which was climbed by mantelshelfing onto the head of an axe spanned across its width.

“Roger’s lead of the crux pitch was nothing short of a master class in mono point use,” James told me. “Roger used a thin blind seam and the odd fingernail size pebble on the vertical wall. I was very impressed, and even more so when I had to second it. The next pitch started with some full body climbing up an overhanging off-width. It was a great contrast to Roger’s delicate precision on his pitch, but certainly more to my liking.”

The aptly named Enigma Variations was graded VII,8 and is fine companion to the winter November Groove (V,6) first climbed by Neil Wilson and G.Thomas in March 1989.