All Go on Black Buttress

Posted on February 16, 2020 by Simon Richardson 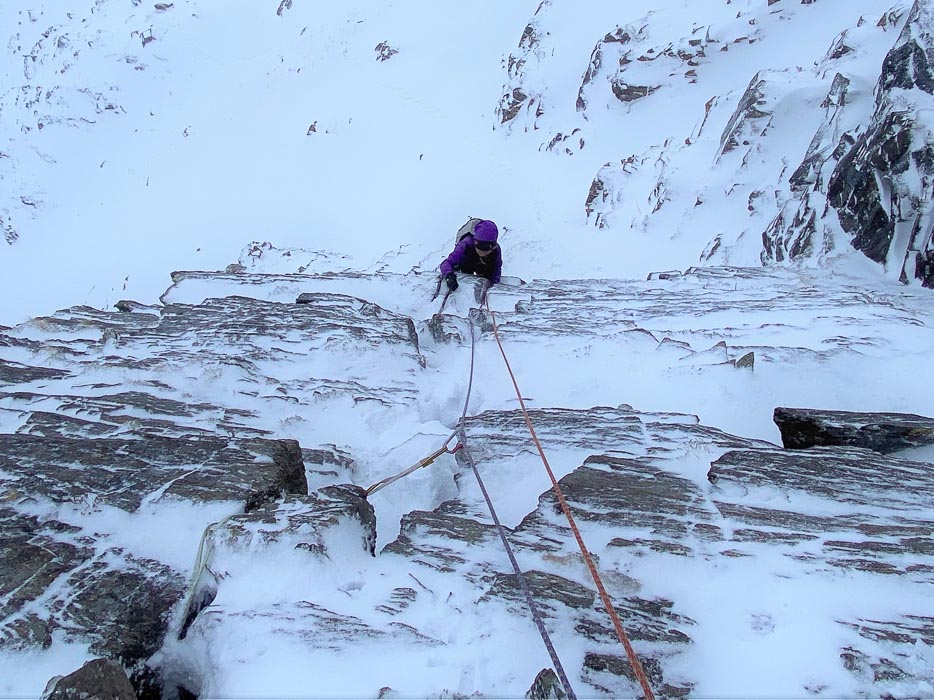 Suzana El Massri climbing the first pitch of The Polish Variation (VI,7) on Mullach nan Coirean’s Black Buttress. After a hiatus of nearly 20 years, this attractive cliff in the Mamores has seen a flurry of new route activity. (Photo Nathan Adam)

Way back in October 1998 I was invited to attend the opening of the North Face Car Park At Torlundy, just north of Fort William. It seems ancient history now, but before the North Face Car Park, most climbers accessed Ben Nevis by walking across the golf course and fighting through the bogs of the lower Allt a’Mhuilinn, so the new car park was quite a thing. The event was over by lunchtime, so with a few hours to spare I drove around to Glen Nevis and up Mullach nan Coirean to have a look at the prominent dark-coloured buttress in Coire Riabhach. I had stared at it many times whilst climbing on the West Face of Aonach Beag.

The cliff was steep, but it was cut by a right to left rocky ramp that I decided to follow to the crest. The way ahead was barred by a steep step around a jammed block in a very exposed position, but above an easy scramble up a gully led to the top. Two months later, I went back with Chris Cartwright and John Ashbridge. It was the day after the SMC Dinner so a winter ascent of Ramp Route (II) was a good option for a short day. We planned to return and climb on the steeper flanks of the buttress, but there were so many other cliffs to explore, that the cliff never rose very far up the list of things to do.

So I was most intrigued, delighted even, when I heard that Will Rowland, Simon Teitjen and Fran Thompson had added a number of new routes to the cliff over the winters of 2016 and 2017. The descriptions for Boab’s Buttress (V,6), Boab’s Burnt Head Gasket (V,6), It’s Not A Jeep! (IV,5), A Roll and Hot Boaby (VI,7) and No! (IV,5) will appear this year’s SMC Journal.

This season, unaware of the recent activity, Nathan Adam took an interest in the cliff. Nathan repeated Ramp Route and the following day (January 15) he climbed a new line with Iain Howie, Could be Worse (V,4), on the right flank of the cliff. This had a serious second pitch, although it was not technically difficult. “It’s a grand wee crag and hoping to get back there before too long,” Nathan enthused. “Strangely enough I bumped into Will Rowland in the supermarket afterwards who was telling me he’d done a few new routes up there too so not as untouched as I initially thought from the Ben Nevis guide!”

Nathan returned with Suzana El Massri and Will Rowland during the recent lull in the stormy weather. “I’ve been back up to Black Buttress again the past few days whilst the freezing and snow level has been down low,” Nathan told me. “We climbed one new route and a variation on A Roll and Hot Boaby.

The Polish Variation (February 12) lies on the left side of the crag near the first pitch of Boab’s Burn Head Gasket (which looks like a great line in the upper corner), and climbs to where Ramp Route emerges onto the front face of the buttress and then follows the top 20m of a Roll and Hot Boaby. I found this to be quite hard and very steep with poor feet but excellent hooks, but it is only 12m or so before the angle eases off, so probably fair at VI,7. The name is a play on Suzana being half Polish and that she was meant to be in Poland climbing this week before the storms cancelled her flight.

The Shuffler (February 13) was also hard and very awkward but not quite as physical as The Polish Variation so we settled on VI,6. It’s very hard for me to grade things like this as I had never climbed harder than V,6 until yesterday! I can only go from the experience of Will and Suzana who are both good climbers and were happy with the grades as they are until someone says otherwise!”