Posted on February 15, 2020 by Simon Richardson 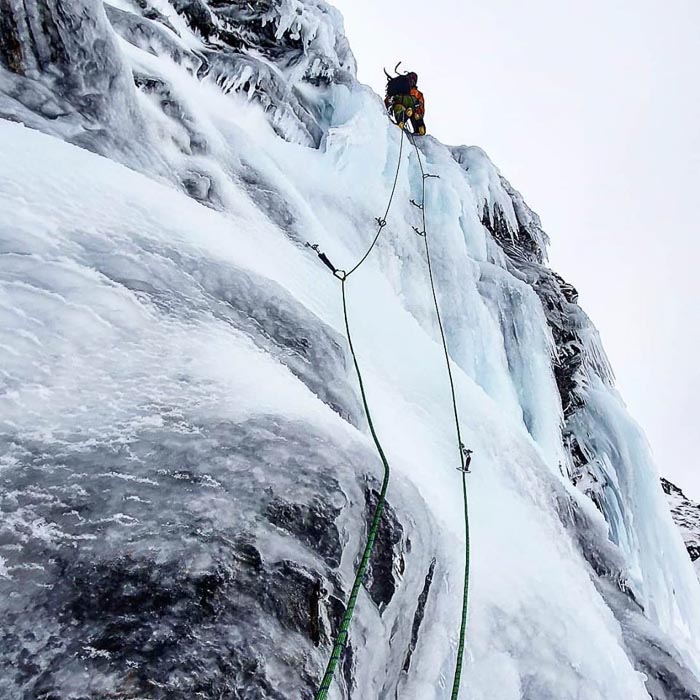 Steven Andrews climbing the steep first pitch of Sideshow (V,6) in Creag Coire na Feola on Ben Wyvis. The continuously stormy weather is bringing many venues into icy condition, which bodes, well for the rest of the season. (Photo Alex Reid)

Steven Andrews and Alex Reid made a possible first ascent yesterday (February 14) on Creag Coire na Feola on Ben Wyvis. Sideshow (V,6) takes the steep icefall and easier angled buttress immediately to the right of the main crag. There is a little uncertainty as to whether the first pitch is new, as Simon Tickle climbed a 35m-high ice pitch called Rapunzel in the same area in March 2018, but its exact location is unclear.

“I’ve been out on Ben Wyvis a bit lately and decided the ice in Coire na Feola may have been forming up quite nicely over the last few days so went to have a look,“ Steven told me.  “Unfortunately pretty challenging approach conditions got us to the crag a bit late to start up the longer established routes on the main crag but a nice icefall to the right looked like a good option for a quick climb. It starts up the steep central icefall on the short buttress immediately right of True Blue. This turned out to provide a really nice pitch of steep ice (30m) followed by a further 30m of easier mixed ground and then 100 or so metres up pleasurable snow slopes to the cornice, as the views opened up down the Cromarty Firth.

I wasn’t sure if this has been climbed/recorded before but afterwards thought it was well worthy of recording, the only downside being the rapid easing of pitch difficulty (V,6, III, I) although my shoulders didn’t see that as much of a downside after the steepness of the first pitch!”

Steven and Alex climbed the route on February 14, whilst the day before it had been unusually still. “I was travelling back from France when everyone else was enjoying the good weather,” Steven explained.  “It wasn’t actually too bad, except for the walk in, and it was pretty sheltered on the climb.”

Postscript: Simon Tickle has been in touch to explain that although Sideshow climbs the icefall left of Rapunzel, it is not a new route, as Simon climbed this feature in February 2019. He descended to the right and called the route Little Sister (V,5). Unfortunately, it never made it into the 2019 SMC Journal. So Sideshow is not an independent new line, but it is the first time the icefall and continuation buttress have been ascended to the corrie rim.

2 Responses to Icy on Wyvis