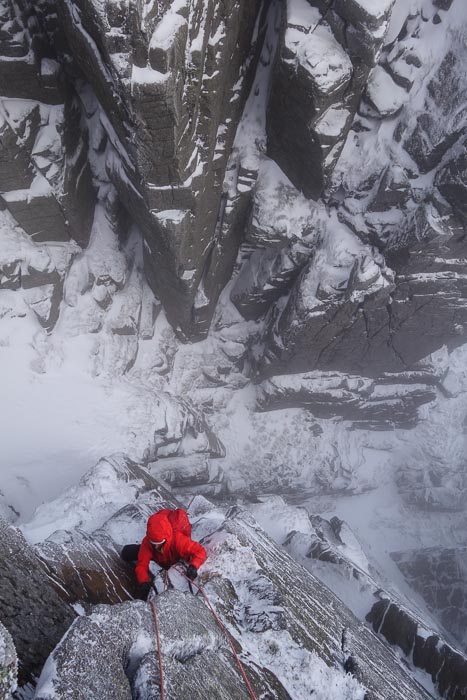 Andy Munro on the first ascent of Goldilocks (IV,5) in the North-East Corrie of Lochnagar. This steep mixed route is spectacularly positioned above the upper reaches of West Gully. (Photo James Richardson)

The Southern Cairngorms have been consistently colder than the northern part of the massif this winter, so the cliffs of Lochnagar quickly came into good mixed climbing condition after the welcome snowfall late last week. On January 18, James Richardson and Andy Munro visited the corrie to attempt Prince of Darkness, a three star VI,7 situated high on West Buttress. This was their third visit to attempt the route, but initially luck was not on their side.

“Andy and I had our third (and final) visit to Prince of Darkness on Friday,” James told me. “Previous attempts have failed due to combinations of poor conditions and incompetence. You could argue these are linked!” Unfortunately, James and Andy were unable to climb the first pitch because it was unfrozen. “We were definitely in the right place'” James explained. “The wet bit on this attempt and the previous visit is on the first pitch – this time it was so minging we didn’t even get to the hard move! The moss was saturated and running with water and really deep. Last year’s visit it had been cold for ages so there is something funny going on. Perhaps there’s a spring, or it’s so sheltered in the gully that it takes a long time to freeze? We also managed to have a fantastic jammed rope abseil adventure on a previous visit, where there was rope friction on the flat edge of the plateau. On that occasion we ended up climbing one of the chimneys opposite to exit!

So this time, we quickly decided on Plan B, which was to climb the line of cracks and corners in the arête to the right of Prince of Darkness. We started level with the ledge at the top of PoD pitch 1 and climbed the arête directly via an obvious groove, stepping left at a small overhang and up the face to a large ledge. Above this we went directly up and followed the buttress crest to the plateau. We called the route Goldilocks and graded it IV,5. It’s in a good situation and the climbing is more amenable than it looks.”

Not only did James and Andy save the day with their ascent of Goldilocks, they also had time for an an early repeat of Quick Dash Crack (IV,5) on Sunset Buttress on their way back down.