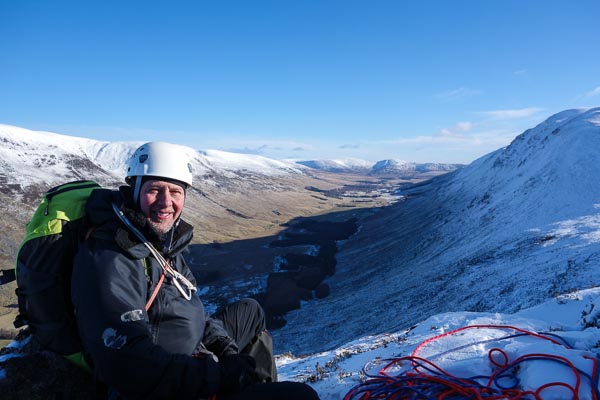 Angus Glens pioneer Forrest Templeton atop The Scorrie with the lower reaches of Glen Clova stretching behind. (Photo Simon Richardson)

On February 11, Forrest Templeton and I visited Glen Clova. In recent seasons Forrest has been exploring The Scorrie, the pronounced buttress flanking the right side of Winter Corrie, so I thought it was a good opportunity to familiarise myself with the whereabouts of recent routes. In 2015 he climbed a series of grooves up the front crest called Ramp it Up Ye (IV,4) with Brian Duthie, and I was intrigued whether the prominent corner on the right side of the crest was unclimbed. Forrest said their route was well to the left, so we enjoyed a varied five-pitch expedition up the right side of the buttress. Corner Ahoy! (V,6) started with a subterranean chimney and finished up the corner, which (inevitably) proved more awkward than it looked.

Forrest and Brian also added a route to the crag up and right of The Scorrie buttress in 2016, which they called The Scorrie Romp (II/III), and this prompted Forrest to return on February 25.

“I soloed the first short wee gully chimney as you descend into the upper buttress of the Scorrie from the right,” Forrest told me, “but took cold feet due to poor placements and traversed right onto frozen turf just below the top. Before this I started up The Scorrie Romp, but instead of going up the continuation gully, I followed the horizontal ledge and where the steep upper wall ended just before the crest I climbed a chimney gully which petered into a shallow gully and came out just above the tree belay on the Scorrie Romp. It followed the same line to the top finishing at the cairn on the corrie rim. It was about the same grade (II/III), and I named it One Man Gastric Band as the ledge that skirts the upper sector of The Scorrie reminds me of a gastric band around it’s big belly. If the wee short gully (25m) is worth naming, I propose Short Hearse (III) because this is where I thought I may end up at one point!”