Posted on February 24, 2018 by Simon Richardson 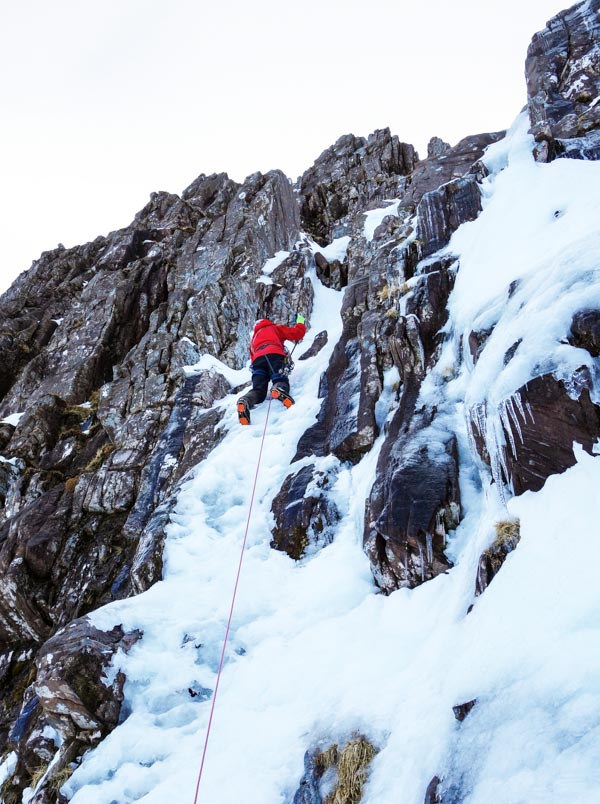 Dave McGimpsey climbs hills nowadays. Humps, tumps, lumps and bumps all turn him on. Not that I can comment, having bagged Munros since I was 12. But the best climbing conditions since 2010 were enough to tempt him out.

Conditions may be great, and produced by a big but crucially one-day thaw, although only crags with enough snow initially are in such good nick. In general, the further east or north you went, the less snow there was, and so now the less neve and ice there is. And of course, the higher the better, although I suspect the highest snows may only be crusty.

So Coire na Caime on Liathach, highest of its corries, seemed a good bet, with the doubt being whether there was enough snow before the thaw. Pictures on the SAIS blog showed the ice having diminished in Coire Dubh Mor, and diminished a lot in the lower Coire Dubh Beag, but Coire na Caime is higher and more secluded, rarely visited and rarely photographed. But with a new line!

Friday February 23 was forecast to be a good day in the North-West, albeit a bit windy from the south, but Coire na Caime is north facing and should be sheltered. The approach up the south side of Liathach was gruelling as ever, but we started early enough to avoid the sun softening the snow. On reaching the ridge, we popped down into the descent gully to escape the biting wind.

We were heading for a ridge that bounds Vanadium Couloir on the left and with a prominent line of grooves up its centre. Now the guidebook describes a route called Valentine Buttress with a very similar description and possibly the reason why the route hadn’t been tried before. But Valentine Buttress is actually a deep gully further left, so an odd name but one which had done us a big favour (the guidebook topo is correct). After a long descent and traverse under Bell’s Buttress, we could finally see that our route was in nick. There wasn’t much in reserve, because the lower Am Fasarinen had much less ice, but here the grooves were filled with admittedly thin ice.

So we started up ice on the right, close to the original and unrepeated start to Vanadium Couloir, and followed a groove line. An ice screw runner would have been nice, but we hadn’t expected thick ice and had left them in the car. So with some finger crossing leading to perfect ice, the worry was over quickly and rock runners below chockstones helped a pull over into groove which led left into the main groove-line. We could have tried the direct start but it looked a bit hard. Actually it was a bit bare too but I admit that wasn’t the prime reason.

The ice in the grooves was thin but often on top of blobs of turf, an ideal combination. Although the turf was concrete hard, and no way could we place our warthog, the ice on top of it worked a treat. There were just enough cracks in the walls either side that the climbing wasn’t too stressful, despite the ice being a bit scratchy in places. To make up for missing the direct start, the top tier held a groove, which looked too steep and rocky in my photos, but held just enough ice for us to follow it.

So the route turned out to be a bit of a cracker, and 250m long, although probably losing a star for being escapable into Valentine Buttress below the top tier. A name of Sweet Spot seemed to fit the conditions and we decided on a grade of V,5, although it could be harder in the future. And we were up in reasonable time to admire fantastic views all round on a great winter day.