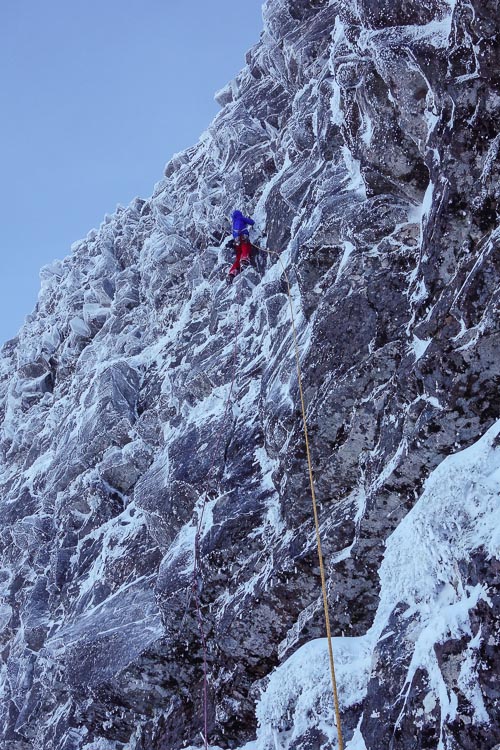 Andy Inglis and Adam Russell made the fourth ascent of the Northern Highlands test-piece The God Delusion (IX,9) on January 20. This seven-pitch voyage up the awe-inspiring Giant’s Wall on Beinn Bhan in Applecross, which was first climbed by Guy Robertson and Pete Benson in 2008, epitomises Scottish mixed climbing at its finest. It was repeated by Martin Moran and Pete Macpherson in 2010 and Iain Small and Murdoch Jamieson in 2015 and is one of the most sought-after winter routes in the country.

“We had a classic case of a ‘perseverance’ ascent,” Andy told me. “Adam’s van broke down Friday morning and we had to borrow a car (I think we owe Mrs Russell a bottle of wine!) Then tricky road conditions north of Inverness made the drive pretty slow and hazardous, and it was a slow going approach to the crag in up to knee-deep snow.

But the forecast and perseverance paid off and we started climbing at about 8.20am – both of us secretly thought it might be too late and that we should maybe temper the days objective, but fortunately neither of us piped up! Anyway we managed to navigate our way up the staggering route to top out to amazing sunset light and views of Torridon and the Cuillins. Needless to say we were pretty excited and shocked to have got up such a monster, and in daylight!

What a route, and hats off to Guy and Pete for the courage and commitment to forge such an unlikely passage up the Giants Wall, especially the overhanging barrier wall on pitch 6!”