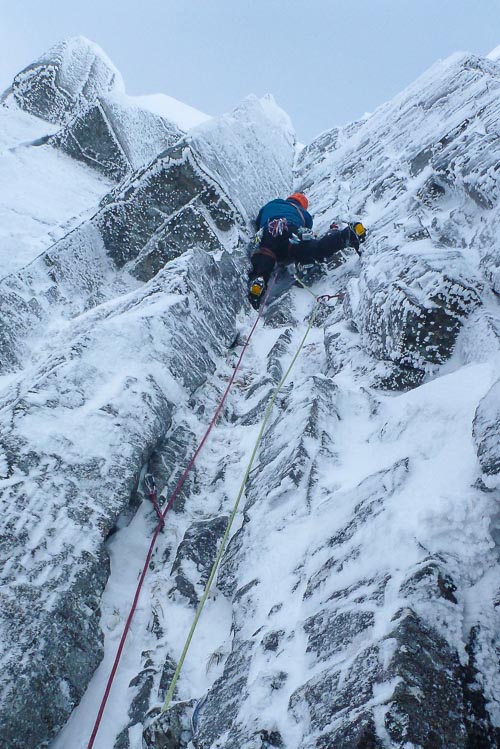 Pete Davies, Helen Rennard and Donie O’Sullivan have been exploring the upper right wall of SC Gully on Stob Coire nan Lochan in Glen Coe and have come away with three good new two-pitch mixed climbs. All three routes start from a belay on the right side of SC Gully above this route’s main difficulties. Alternatively, if SC Gully is not in condition the same point can be reached by a 50m abseil down SC Gully’s upper right wall.

SC Chimney (V,6) takes a prominent chimney high on the right wall of SC Gully and can be easily seen from the corrie floor. It was climbed by Pete and Helen at the end of last season (March, 2017). They returned on January 1 and climbed Consolation Corner (V,6), the large right-facing corner to the right. Six days later (January 7), Pete and Helen were back with Donie O’Sullivan to climb Dig For Victory, which takes the centre of the rib to the left of SC Chimney before finishing up this for the last ten metres. This last addition proved to be the most difficult climb of the trio and weighed in at VI,7.