Posted on February 12, 2015 by Simon Richardson 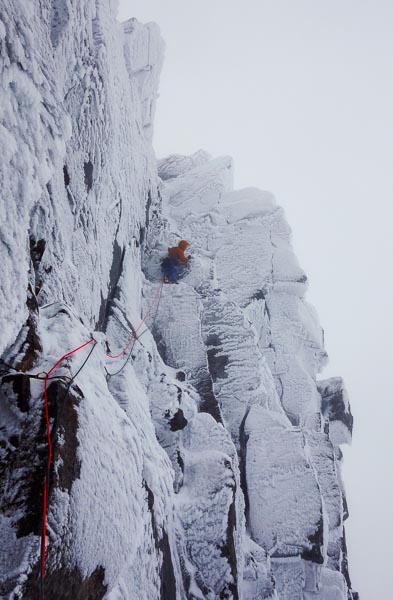 Will Sim on the third pitch of Pale Rider (VIII,9) on the Eastern Ramparts on Beinn Eighe during the second ascent. Robin Thomas’s ascent of this pitch in 2010 was one of the earliest on sight Tech 9 leads. (Photo Andy Inglis)

“With all the good weather and pictures of North-West routes in amazing condition we were both desperate to get out,” Andy told me. “Especially with Will off to Norway at the weekend for work (ice climbing in Norway, is that really ‘work’?)

As it turned out, the day dawned with drizzle, sleet and low cloud and the crux of the day might have been leaving the car. Nearly three hours of slogging through wet snow up Beinn Eighe had us on top, with the freezing level hovering somewhere around the top. Hopes were not high! Dropping into the corrie and moist cloud had us wading about looking for something appropriate after initial hopes of a Far East wall route were dashed, so traversing round to the Eastern Ramparts was the obvious next option.

As it turned out Will lost patience looking for the start of Boggle and headed straight up into the corner line of Pale Rider. Belaying Will on this first pitch may have been the grimmest period of this winter for me… drizzle rolling past, soaking clothing, and my desire for coffee and warm clothes going through the roof. Fortunately the climbing was superb, engrossing and technical, with three great well-protected pitches! The added unexpected bonus was the third pitch that Martin had written so engagingly of on his excellent blog turned out to be straightforward (in daylight, maybe that was cheating?). The wall was encased in thick rime the like of which neither of us had seen on this wall before, and there was even hero ice up the final chimney of Pale Diedre! Pale Rider is certainly a high quality addition to the wall and definitely three stars!”

Simon Richardson is a passionate Scottish winter climber
View all posts by Simon Richardson →
This entry was posted in Repeats and tagged Andy Inglis, Beinn Eghe, Will Sim. Bookmark the permalink.