Posted on December 28, 2009 by Simon Richardson 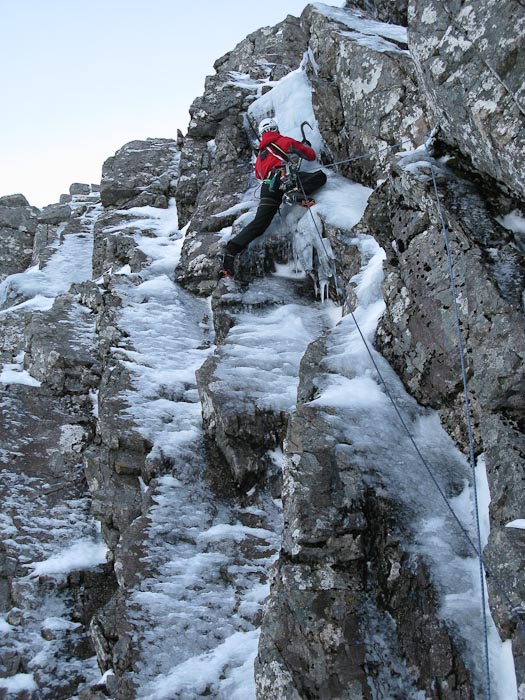 It has been a late start to the winter season. November is typically an excellent month for mixed climbing in the Cairngorms, but unseasonally warm temperatures meant that only the most determined found winter routes high on Braeriach and Beinn a’Bhuird. The snow arrived in earnest at the end of November, and the Scottish mountains turned increasingly wintry.

Big news in Glen Coe is the long awaited second ascent of Against All Odds (VII,7) by Guy Robertson and Blair Fyffe in late December. This prominent winter line to the right of Ossian’s Cave on the North Face of Aonach Dubh was first climbed by Mick Fowler and Chris Watts in February 1988. Recent milder winters have meant the route has been rarely in condition and the first pitch description ’move up right and tension to a bendy sapling’ put off many suitors. Guy and Blair climbed the route entirely free, eliminating the tension traverse and three points of aid on the third pitch.

The other notable event in the Coe was the first winter ascent of Line Up on the Buachaille by Andy Nelson, Andy Sharpe and Kenny Grant. This summer HVS on the left side of Rannoch Wall had been eyed up by several activists over the years, but this wall is renowned for its spaced protection and flat holds. The clearly on form Nelson, made a very smooth lead of the crux corner, and overall the route provided a sustained VII,8 with difficulties on all three pitches.

On No. 2 Gully Buttress, on the West Face of Aonach Dubh, John Lyall and Andy Nisbet took advantage of the cold snowy conditions before Christmas with the first winter ascent of Steptoe (VI,7) and a new route The God Daughter (VI,7), which takes the big groove between Rose Innominate and Oz.

Across on Ben Nevis, Rich Cross and Andy Benson made the first winter ascent of Lysystrata on Number Five Gully Buttress (VI,8) in early December. This steep summer HVS gave two pitches of well protected technical climbing up a series of grooves, and is clearly a good choice when access to the higher cliffs is limited by too much snow.

Iain Small and I also visited the upper tier of South Trident Buttress and climbed Polyphemus Pillar (VI,6), the steep buttress right of Poseidon Groove. A couple of weeks later in mid December, Dave Hesleden and I had a productive weekend on the mountain climbing Ramsay Gray, a new 300m VI,5 route based on the steep pillar right of Route Major on The Little Brenva Face. On Creag Coire na Ciste we added Tinkerbell Direct (VI,6), which takes the steep icefall avoided by the original route and finishes up the headwall above.