An Alternative Finish to The Sting? 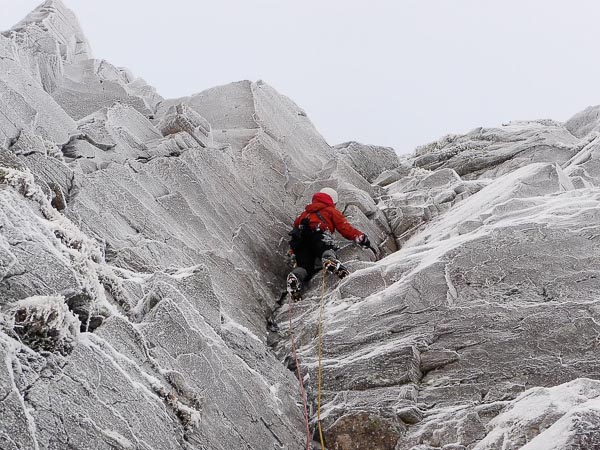 Susan Jensen leading the upper corner of The Sting (V,6) on Creag an Socach in the Southern Highlands during an early repeat in December 2010. (Archive Photo Iain Small)

I received the following email from Michael Barnard yesterday:

“Thought I’d join the general discussion from a while back about The Sting on Ben Dorain, having climbed it (more or less) yesterday [March 24] with Andy Wilson. I’d note that the line drawn on the photo-diagram in Scottish Winter Climbs is incorrect – it shows the route going up left of the right-slanting groove (pitch 2).

We weren’t sure of the exact line on pitch 1, and not liking the slabby nature of a couple of ways tried, ended up just coming in from the right (as for Promised Land etc). The right-slanting groove is a good pitch and the corner above a real joy and well-deserving of all the praise bestowed on it. We thought V,6 fair for both – protection is fine where it matters on the groove and of course brilliant on the corner which we found very positive and certainly not tech 7 (unless you get it verglassed I suppose). Modern axes without adzes weren’t a problem as much was solved by some good old-fashioned hand jamming!

It was above this point (as might have been expected given the name!) that we found the main difficulties. Andy decided the big groove on the right looked more amenable (it’s suggested in the guide as an alternative), but found it capped at the top by a steep slabby wall, so he downclimbed a bit then moved up and left to belay. The only line of weakness I could see above was a narrow groove up the headwall, which was a bit heart-in-mouth – few reliable placements and very little gear. It felt like a VI,5 pitch but was tech 6 climbing so bold VI,6 I guess? There was an in-situ peg at Andy’s belay so presumably someone may have finished this way before. Does Golgotha go up here?”

It’s a long time since I’ve climbed on Creag an Socach, but I do remember that Golgotha finishes well right of Second Coming. (In fact, Defenders of the Faith finishes up Golgotha). If anyone has any idea where Michael and Andy may have finished, please leave a comment.

Simon Richardson is a passionate Scottish winter climber
View all posts by Simon Richardson →
This entry was posted in Repeats and tagged Andy Wilson, Creag an Socach, Michael Barnard. Bookmark the permalink.