Posted on February 26, 2013 by Simon Richardson 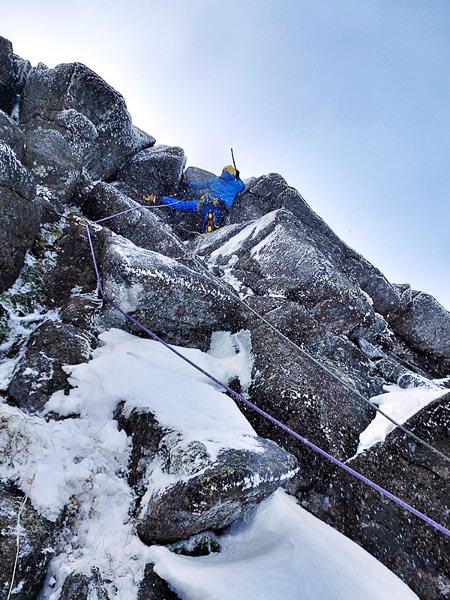 Greg Boswell pulling through the crux roof of Mort (IX,9) on Lochnagar during the second ascent. “After some huffing and puffing and some woeful whimpering… ‘I don’t know if I can do this,’ and ‘I’m all idea-ed out,’ I eventually unlocked a crazy sequence that allowed me to cross over the huge prominent fin that defines this route.” (Photo Nick Bullock)

On February 22, Greg Boswell, Guy Robertson and Nick Bullock pulled off one of Scotland’s the most prized winter repeats with the second winter ascent of Mort (IX,9) on the Tough-Brown Face of Lochnagar. The 1995 SMC guidebook to the cliff described Mort as a challenge for the next generation, but it was the old guard in the shape of Brian Davison, Andy Nisbet and Dave McGimpsey who claimed one of the mountain’s greatest winter prizes in January 2000.

Mort, which takes a prominent line through the centre of the damp and vegetated overlapping boiler-plate walls of the Tough-Brown Face, was first climbed by Mike Forbes and Mike Rennie in 1967. They used ten points of aid, but the route was free climbed by Dougie Dinwoodie and Bob Smith nine years later and graded E1. Nowadays it sees no more than one or two ascents each summer and is thought to be at the upper end of its grade. As the most prominent line through the Tough-Brown Face it was an obvious, if futuristic winter challenge, and was first tried by Colin MacLean, Nisbet and Davison in January 1985. The date is significant as the only route of comparable difficult at the time was Guerdon Grooves on Buachaille Etive Mor, which had been climbed, by Arthur Paul and Dave Cuthbertson the previous winter. MacLean led the first hard pitch, using two rest points above the big roof, which is the summer crux, and reached the belay ledge after five hours. Nisbet and Davison were too cold to lead through, so MacLean continued in the lead but he reached a blank section about 15m from easy ground and retreated. Although they had failed, the attempt was an eye-opener and Nisbet and MacLean were quick to capitalise on their experience. Over the following weeks they made the first winter ascents of Unicorn in Glen Coe and Winter Needle on the Shelter Stone.

All three climbers returned to Mort during the following winters. Davison estimates that he visited Lochnagar 18 times with MacLean to try the route, but it was rarely in condition. In March 1992, Davison and Nisbet made an attempt which ended after Davison took a 20m fall over the crux roof, which he had just free climbed, landing at Nisbet’s feet. As the number of people climbing high standard mixed routes was increasing, it became clear that the route was not going to hold out forever. In December 1999, Alan Mullin made a spirited attempt with Guy Robertson. Climbing on sight in difficult powder conditions, Mullin regained almost regained MacLean’s 1985 highpoint on the third pitch, but was again stopped by the blank nature of the rock.

Just after New Year 2000, Lochnagar came into superb condition. Most importantly for an ascent of Mort, there was a thin smear of ice above the blank section, which had stopped MacLean and Mullin on their previous attempts. Early on Saturday January 15, Nisbet climbed up to the first stance and Davison led through on the critical second pitch. Onlookers were highly impressed as Davison pulled swiftly through the roof, and stepped left around a rib into a vertical groove. The only protection on this section was a warthog and a poor tied-off blade peg and Davison reached the belay ledge after two hours in the lead. On the third pitch, Nisbet took a couple of 5m falls at the blank section, before handing the lead to Davison who managed to place a poor peg and reach a small turf placement and the ice smear above. The ice was thin and almost vertical, but after 15m Davison reached the belay ledge. Nisbet and McGimpsey came up in the dark, and it was then a formality for Nisbet to lead the final pitch to easy ground.

Mort was graded IX,9 and was rated by Nisbet as the hardest route he had ever climbed, both from a technical and seriousness aspect. The ascent was met with delight through the Scottish climbing scene. It was felt to be entirely appropriate that Davison and Nisbet, who had been associated with the route for so long, should finally climb the route.

The story of the second ascent last Friday is not mine to tell, so I recommend reading Greg’s graphic first-hand account on his blog. In summary, Guy led the first pitch, with Greg taking the honours with a superb lead of the crux pitch. Unfortunately Greg took a fall when a block came out below the roof, but he completed the pitch cleanly on his second attempt. Guy then completed the route with a smooth lead of the third pitch, which although still being solid Grade VIII, turned out to be more reasonable than its reputation may have suggested.

It was brilliant to hear Guy confirm afterwards that Mort fully deserved both its Grade IX rating and its place as one of the landmarks in the history of Scottish winter climbing.