Posted on February 16, 2013 by Simon Richardson 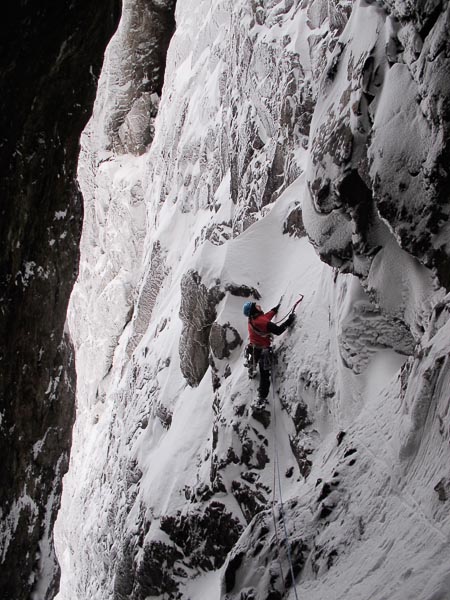 Crag Jones on the spectacular fourth pitch of Raven’s Gully (V,6) on Buachaille Etive Mor. There are two finishes to the standard line – either climb the chimney on the right (awkward in lean conditions), or traverse left and finish up icy grooves, both gained via this traverse left from the foot of the Direct Finish. (Photo Stephen Reid)

I was intrigued last week, by a brief mention on UK Climbing that a team had made a rare ascent of Raven’s Gully with the Direct Finish in Glen Coe on February 8. It turned out it was Plas y Brenin instructors Keith Ball, Tim Neill and Dave Rudkin, who thoroughly enjoyed this classic outing with its intimidating Direct Finish (VI,6) first climbed by Yvon Chouinard and Doug Tompkins in February 1970. For many years this was the most impressive winter ascent ever achieved by a visiting overseas team, and it has had very few repeats since.

It struck me that the classic Raven’s Gully (V,6) does not see much traffic nowadays, so I was delighted to receive the following email from Stephen Reid, which may provide some impetus for some more ascents (once the weather cools down again).

“Just thought I’d let you know that myself and Crag Jones climbed Raven’s on Tuesday (February 12). It’s got to be the hardest Grade V I’ve ever done! I was spurred on by mention on UK Climbing that the Direct had been climbed the previous week – I now know from Andy Nisbet that this was by a Plas y Brenin team making a very rare ascent. Indeed we tried to climb the Direct but couldn’t work out the last pitch (the description in the winter guide is not very helpful!) and so abbed back down and finished via the right-hand version of the original way which was tremendous and required combined tactics on the final little sting in the tail chimney. We also found the route lengths out in the guide. Raven’s is over 200m long and the Direct is at least 75m – I’ve told Andy. Got back to Lagangarbh at 1am!”