Posted on February 15, 2013 by Simon Richardson 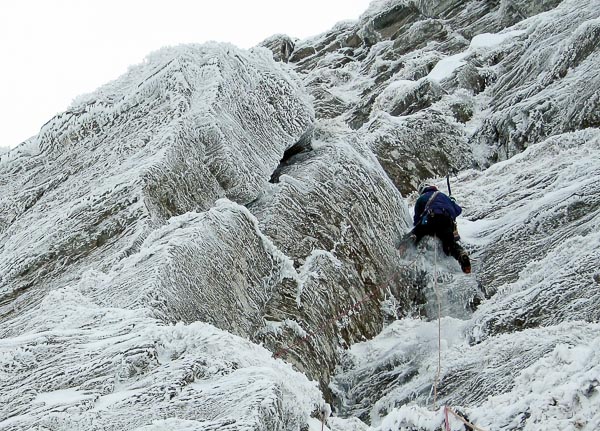 Andy Nisbet on the first pitch of Rowardennan Rib (V,5) on Ben Lomond. Despite its proximity to Glasgow, the summit cliffs of Ben Lomond are still providing new ground for the winter explorer. (Photo Davie Crawford)

Andy Nisbet made a rare visit to the Southern Highlands instead of his beloved North-West on Tuesday February 12. Here is his story:

“Things weren’t going well on my way to meet Davie Crawford in Paisley. I’d forgotten to bring his address and only by luck had his mobile number. But that wasn’t immediately useful, as I’d forgotten my phone. Also the motorway had just been closed by an accident near Stirling and I’d been sent into Bridge of Allan, and now I was lost. And I didn’t have my passport to get into Weegieland. Ben Lomond seemed far away!

Winter climbing does have its highs and lows. A friendly policeman directed me to Stirling Services where I went begging, and a friendly customer phoned Davie for me. I even found my way through Paisley more by luck than anything else. And next day we arrived at Ben Lomond, and all was white again (in both senses).

After a couple of good days with friend Sonya, I had become quite keen on Ben Lomond and had even been for a prospecting walk under the cliffs last summer. In fact it was Sonya’s original idea to go, as she’d been sent a photo by Davie saying there were new lines to be done (before I’d even met her in fact). This seemed unusually generous but I wasn’t going to refuse. So it seemed to complete the circle that I would climb there with Davie.

Ben Lomond is a similar altitude and aspect to An Teallach so I hoped conditions would be equally good. But walking up was a bit worrying as there was much more fresh snow, from Sunday presumably when the NW seemed the only place to escape. But Ben Lomond is so popular with walkers that there was a reasonable trail and higher up many of the slopes had been blown clear. It was a cold day and the turf was frozen down to 300m so no worries there, apart from a very chilly gearing up on top. While descending to the cliff in thin mist, it did look extremely white with all the ledges and the cliff base piled with high angle snow deposited by a fierce updraft. It had been a bit misty in the summer also and I might have been in an optimistic mood, so plan A looked sufficiently outrageous for us to carry on to the remote end of the cliff where Davie and the Postie had put up Endrick Corner in 2006.

Some 30m right of Endrick Corner is a prominent rib leading up to steep but turfy ground above; this seemed like a blank space. The corner on the right of the rib looked good but with a very steep step. So the plan was to go up left of the rib but as I climbed up towards it, the right corner was calling to me and showing me that it had more ice than we’d thought. It was still a fierce pull with not great protection into a snowdrift, which had to be cleared, but a small ledge on the top of the rib had a great crack (pretty rare on Ben Lomond). Davie got the much more sustained upper pitch with just enough turf and just enough protection to keep him happy. He was able to pull direct through a roof system into corners above, leaving me with an easy last pitch. V,5 seemed like a fair grade for Rowardennan Rib as it felt hard but without moves that took much time to work out. So we had time for a second route; I had to get another route in before my visa ran out.

There were three parallel gullies at the far end of the cliff, all short but distinct lines. We took all the gear down and roped the left one, some 60m Grade III. The middle one was easier and we were getting tired, so we soloed that one at 70m Grade II. And the 80m right one was very tiring but probably still Grade II.”