Abyss Variation on The Brack 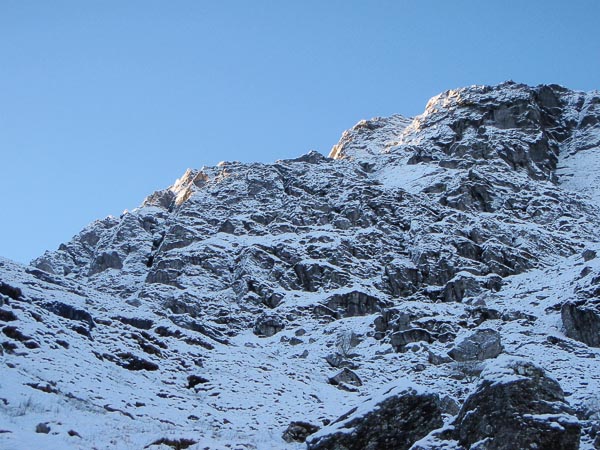 The north face of The Brack with the Lower Tier centre left. The Abyss takes the corner-groove, which joins the large snow ledge at mid-height just left of centre, and was first climbed by Ken Crocket and Alastair Walker in February 1986. (Photo Martin Holland)

Martin Holland and B.Hauffe added a new variation to The Abyss on the Lower Tier of The Brack in Arrochar on January 15. Martin takes up the story:

“We gambled on The Brack turf being frozen as it often seems to freeze up better than I’d expect. I’d hoped to do a new line left of The Abyss. The gamble only partially paid off as the turf was good in places, but although cold was dry in others. We did a new pitch up a left facing corner 15m left of The Abyss at about Tech 4. I’d hoped to go direct up the left hand side of the slab above this corner, but the turf/moss blobs and ledges on the slab were dry and the ice wasn’t thick enough – when in condition the slab looks like it would go at about II/III. I decided the slab needed to be left for better conditions and we traversed easily right to the belay at the flake right of the corner of the second pitch of The Abyss. In order to have a look at some new ground and not damage the moss in the corner of The Abyss we took an easy ramp line up left and back right through corners at about II. Above this we joined The Abyss to the top [resulting in a grade of IV,4 for the complete route].

The lower tier is an odd sort of crag. There are good pitches, but a lot of rambling easier ground. It might be worth trying to link the better pitches of several routes together such as Pitch 1 of our Abyss variation start followed by the bottom corner (second pitch) of The Abyss, then up that route or Four Minutes Past Hell, followed by the middle section of Hell’s Teeth followed by the top pitch of Chockstone Alley.”

Simon Richardson is a passionate Scottish winter climber
View all posts by Simon Richardson →
This entry was posted in New Routes and tagged B.Hauffe, Martin Holland, The Brack. Bookmark the permalink.

4 Responses to Abyss Variation on The Brack