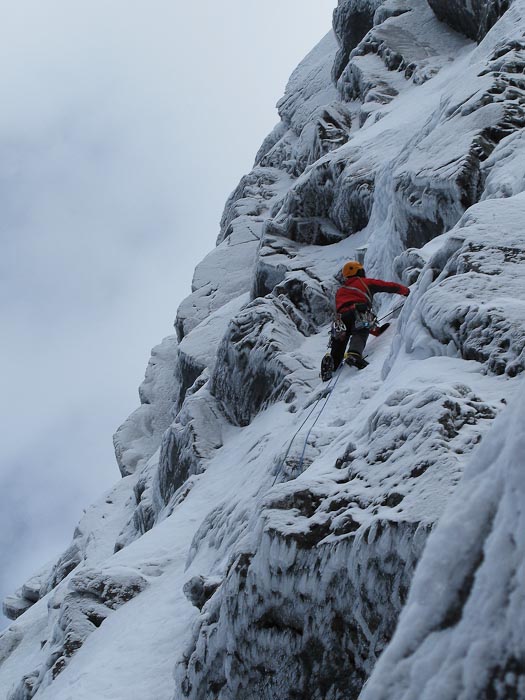 On Sunday April 18, Guy Robertson and I made a late season trip to the Ben. After a late start and failure on Plan A, we arrived under the headwall of Observatory Buttress at about 2pm in the afternoon. We climbed the attractive central groove-line that gave two long pitches of steep ice to emerge on the final easy crest of the buttress overlooking Point Five Gully.

Robin Clothier and Nick Harper made an ascent of The Flight of the Condor on Indicator Wall, and other teams were busy on Hadrian’s, Psychedelic and Point Five Gully.

Robin and Nick have had a good late season on the Ben with an ascent of Godefroy Perroux’s rarely climbed Nid d’Aigle on Indicator Wall and Space Trucker on Orion Face. This links Spacewalk with Journey into Space and Astral Highway. Although it climbs little new ground it travels some of the more reliably forming pitches on this part of Orion Face and is a welcome addition to the thin face climbing on the Ben.

Is this the last of the winter? Not quite – its snowing outside my window right now, but south-west winds are forecast for Friday – this could signal the end of this fantastic season!