Busy Weekend on The Ben

Posted on December 5, 2011 by Simon Richardson 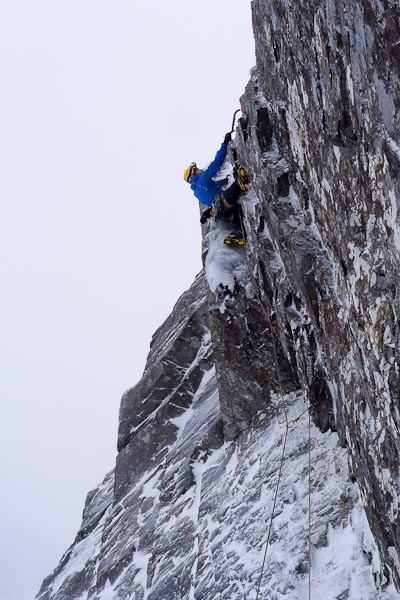 Greg Boswell on the first ascent of The Big Cheese (VIII,8) on Moonlight Gully Buttress on Ben Nevis. Boswell climbed this three-pitch icy mixed route with Jim Higgins and Harry Holmes on Sunday December 4. The trio named the route in honour of a massive lump of Cheddar (about the size of a breeze block) that they had carried up to the CIC Hut for their dinner. (Photo Jim Higgins)

When Helen Rennard and I walked up to the CIC Hut early on Saturday morning (December 3), we were expecting to find it empty. Instead, we found it full of the stars of the 2011 Scottish Tooling Series. They had won a long weekend in the hut in the company of Scottish winter gurus Malcolm Bass, Simon Yearsley and Greg Boswell as a prize for winning their category in the event. The previous day they had made a mass ascent of Gutless (IV,5), a thrutchy chimney-line on The Douglas Boulder, and were now gearing up for another sortie into the cold and snowy weather.

Helen and I headed up into Coire na Ciste and climbed the line of corners and grooves to the right of Polyphemus Pillar on the upper tier of South Trident Buttress. I’d always meant to look around the corner from Polyphemus Pillar but had never quite got around to it, but as chance would have it, I was looking at a photo of the Ben the other day and saw a sliver of ice drooling out of a gully high up on the buttress. Sure enough when we looked round the corner on Saturday the line was complete, and it resulted in Cyclops, a three pitch V,5 icy mixed climb finishing up Pinnacle Arête.

We heard voices in the mist during the day, and it turned out that the STS team were all around us, making ascents of The Groove Climb (V,6) and Pinnacle Arête (IV,4). Most impressive were Greg Boswell and Fiona Murray, who made the second ascent of The Minge. This VII,8 took Pete Macpherson three attempts before he finally made the first winter ascent with Ed Edwards in February 2009.

It snowed most of Saturday night, but Greg went up to Moonlight Gully Buttress on Sunday with Jim Higgins and Harry Holmes and climbed a new direct line up the left side of the face. The crux was a roof above the lower slab leading into a bold hanging groove. “There was some good ice around,” Greg told me, “but unfortunately it wasn’t mega fat. Annoyingly for me, I took a fall on the first pitch trying to get established in the groove after pulling round the roof. But I lowered down and did the route ground up on my second go. I thought the route felt pretty bold after the roof section and I scared myself a little, as there wasn’t much gear to be found in the groove (none that would have stopped you hitting the slab).”

The second pitch was easier, and the last pitch took a corner with another ice-capped overlap/bulge, which lead to easy ground and then to the top. Overall, the climb was graded VIII,8. “It’s not a long route,” Greg explained, “but the first roof packs a punch and the groove is pretty bold and committing!”