Posted on December 7, 2010 by Simon Richardson 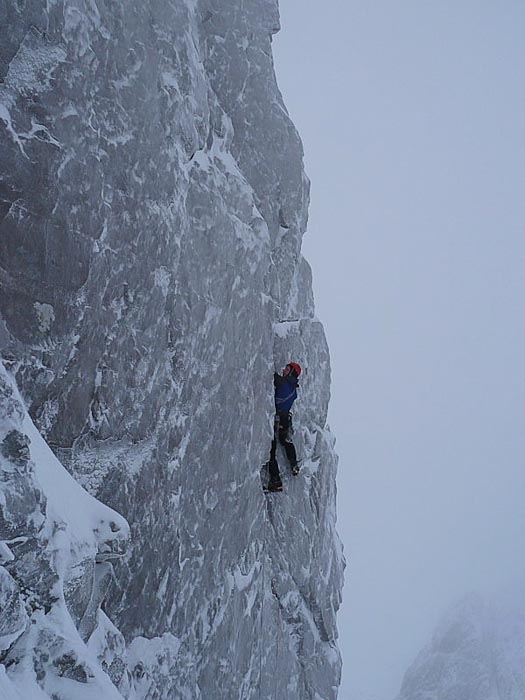 Neil Adams on the first pitch of the spectacular Strident Edge (VI,7) on South Trident Buttress, Ben Nevis. This steep summer VS was first climbed in winter by Erik Brunskill and Gareth Hughes in January 2005. It has seen a number of winter repeats and is considered to be at the upper end of its grade. (Photo Heike Puchan)

It was a busy weekend on Ben Nevis once again, with many climbers enjoying steep mixed routes such as Cutlass, Tower Face of the Comb, Gargoyle Wall, Babylon and Darth Vader. Heike Puchan, who made an ascent of the spectacular Strident Edge on South Trident Buttress on Saturday with Neil Adams, said that the “conditions were perfect for modern mixed routes.”

Neil also made an early repeat (possibly the fourth) of Some Like it Hot (VII,7) in Stob Coire an Laoigh in the Grey Corries with Jim Higgins on December 2. A couple of days later across in the Mamores, Andy Nisbet made the first ascent of the 400m-high Central Buttress (II), the best-defined buttress to the left of Solstice Gully, on the North Face of Am Bodach.