Posted on September 25, 2019 by Simon Richardson 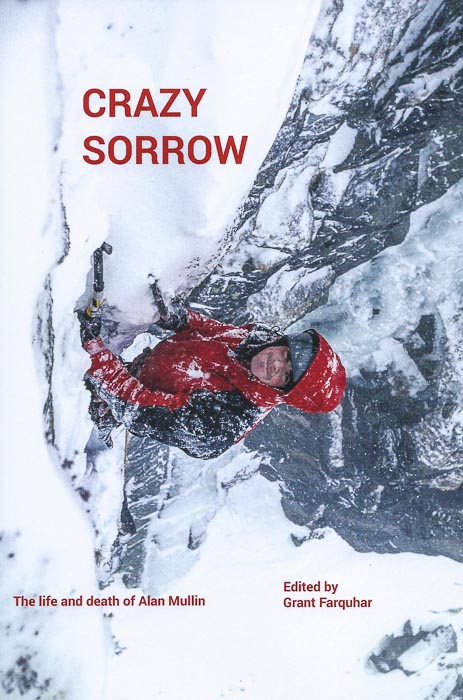 Crazy Sorrow edited by Grant Farquhar describes the life of Alan and Mullin, one of the most influential Scottish winter climbers of all time. The cover shows a Heinz Zak photo showing Alan Mullin climbing at Rudolfshutte in Austria. The book was published by Atlantis Publishing in August and is available from Amazon.

Crazy Sorrow is a significant book. It documents the life of Alan Mullin who stands alongside Raeburn, Patey, Smith and Nisbet as one of great innovators of Scottish winter climbing. Grant Farquhar should be congratulated for not only describing the life story of this important pioneer, but also for capturing the spirit of a key period in Scottish climbing history.

Alan Mullin made an unconventional entry into the world of climbing. He joined the army at the age of 16, and spent eight years in active service before he retired due to an injured back. Without the constraint of a full time job, he was able to turn his considerable energy to Scottish winter climbing. After experimenting with some of the easier routes in the Northern Corries, he was leading difficult Grade VI within 12 months. He formed a strong partnership with Steve Paget, and in October 1998 (Alan’s third season), they made the second winter ascent of The Needle (VIII,8) on the Shelter Stone.

The following year Mullin and Paget upped their game a notch further and returned to the Shelter Stone to make the first winter ascent of The Steeple (IX,9) with the Dusk till Dawn Variation. The route was climbed in a single 24-hour push by climbing continuously through the night. Two weeks later, Mullin was in the headlines again with the first winter ascent of Rolling Thunder, an E1 rock climb on the Tough-Brown Face of Lochnagar. This was the first (and only) time a new Grade VIII had ever been soloed. It stunned the climbing world, not least because no other party made it into the corrie that day as the weather was so bad. Niall Ritchie’s long distance shot of Alan climbing the route with avalanches crashing down either side (reproduced in the book), remains one of the most iconic winter climbing photos ever taken.

The impact of these routes on the Scottish winter climbing scene was electric. It normally takes years of experience to acquire the spectrum of skills necessary to climb high standard winter routes, so how could a relative newcomer operate at the highest standards of the day? The answer partly lay in Alan’s rigorous training regime, but mainly in the total focus and unswerving determination he applied to his routes. As someone new to the Scottish winter game, Alan was unencumbered by the weight of history, and almost unknowingly smashed his way through psychological barriers. Many other climbers realised that they could also increase their performance, and over a couple of seasons in the late 1990s, average standards rose a full grade. No longer were Grade VIIs the province of the elite, but they were accessible by weekend climbers too.

Despite the inspiration Alan provided, he had an uneasy relationship with the climbing community. He claimed to respect no other climber’s achievements, but in effect, he deeply craved recognition by his peers. At first this was forthcoming, but eventually it became increasingly withheld as it was realised that the majority of his ascents were flawed. Several of his routes were climbed when not fully in condition, and others used a point or two of aid. Whilst Alan was always honest about the manner of his climbs, his enthusiasm to describe the intensity of his experience meant that he sometimes forgot to immediately relate all the details.

Alan was on a quest to find a Scottish climb that was comparable in technical difficulty to the hardest bolt protected climbs elsewhere. In November 2002 he fulfilled his dream when he made the first winter ascent of Crazy Sorrow, a difficult E3 6a on the Tough-Brown Face of Lochnagar with Steve Lynch. The route goes through a huge roof on the second pitch with scant protection. Alan graded it X,11 and suggested it was a contender for the hardest traditional mixed climb in the world. Unfortunately the gloss was taken off this remarkable lead by allegations that he had inspected the route beforehand, and climbed it when it was out of condition. Once the photos were published it was clear that the route was in bona fide winter condition, but once again Alan’s impatience had got the better of him and he had abseiled off after the crux pitch and failed to complete the route.

Frozen Sorrow was the last of Alan’s great climbs, and he announced his retirement soon after. He was clearly disenchanted with the climbing world for not recognising his achievements on his terms, but his body was also taking the toll from his intense training regime, and he was living with a series of chronic injuries. Alan found it impossible to control the demons that had driven him so hard during his short but remarkable climbing career, and tragically, he took his own life in March 2007.

Grant Farquhar has made an important contribution to Scottish mountain history by pulling together this account of Alan Mullin’s all too short and turbulent life. Crazy Sorrow is based on Alan’s writings, contemporary accounts by other climbers and more recent interviews. Grant skilfully adds colour to the climbing narrative with accounts of Alan’s tough upbringing and brutal time in the army that sets the context for Alan’s later climbing career. Grant is a professional psychologist and is well placed to explain the internal conflicts that Alan faced at the end of his life.

Crazy Sorrow is not a comfortable read, but it documents a vibrant and important phase of Scottish climbing. The tragedy of the Alan Mullin story is that Alan never recognised his profound influence on the climbing world. If he had, his life may not have been so troubled, and perhaps he would still be with us today.