Posted on September 18, 2019 by Simon Richardson 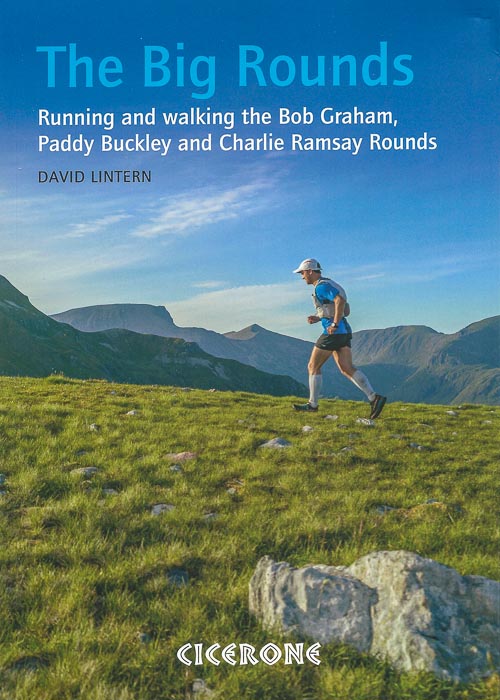 The Big Rounds by David Lintern describes running and walking the Bob Graham, Paddy Buckley and Charlie Ramsay Rounds. The book was published by Cicerone in August and retails at £18.95.

There is a strong cross over between mountain running and winter mountaineering. Both are endurance sports that demand a high level of fitness and no small amount of focus and determination. Many winter climbers run to keep fit and enjoy the exhilaration of moving fast and light over mountain terrain. Indeed, Wendy Dodds, the first person to complete the Paddy Buckley Round and one of the runners profiled in the book, describes herself ‘more than a mountaineer than a runner’.

David Lintern’s innovative book about running and walking the Big Rounds – the Bob Graham, Paddy Buckley and Charlie Ramsay – will appeal to many hill goers. All three rounds involve just over 8000m ascent. The Bob Graham is the most well known and traverses much of the high ground in the Lake District over 61 miles. The Paddy Buckley and Charlie Ramsay rounds are located in Snowdonia and the Western Highlands and are 62 and 57 miles long. The rounds are described in increasing difficulty with the Bob Graham first, followed by the Buckley and finally the Ramsay. Even though it five miles shorter and less technically challenging, the Ramsay edges the Buckley as the most difficult because it is more remote, has poorer weather and is harder to reconnoitre.

What particularly attracted me to this book is that it puts as much emphasis on walking these great rounds as running them. Sure they may involve two or three overnight camps, but they set significant challenges for hill walkers. After a detailed introduction, David describes each round in turn with a detailed route guide, followed by a section on practicalities, history and then a personal runner’s story.

This strong emphasis on people is followed up by nine interviews with ‘People of the Rounds’ from Nicky Spinks to Charlie Ramsay himself. The interviews include quotes such a ‘Big fun hill days – it’s as simple as that’ and ‘You don’t need to be super-human’ that will no doubt provide inspiration for us mere mortals to get off the couch and attempt one of these great expeditions, whether wearing walking boots or running shoes.

I enjoyed studying The Big Rounds. The 192-page book is beautifully produced in A5 format and illustrated with inspiring photos and the all-important maps showing each round are especially clear. Unfortunately my hill running days are well behind me, but walking one of these rounds is now firmly on the To Do List!

Simon Richardson is a passionate Scottish winter climber
View all posts by Simon Richardson →
This entry was posted in Book Reviews and tagged David Lintern. Bookmark the permalink.