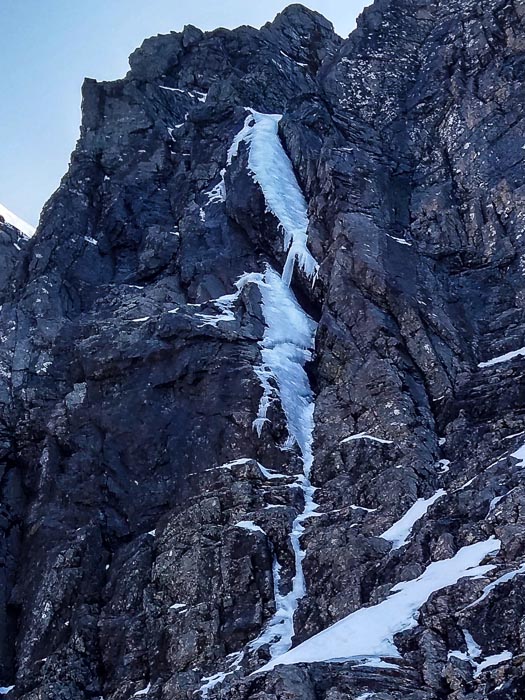 The last Grade V ice climb of the winter? Crag Jones and Andy Bunnage made an ascent of a very thin looking Smith’s Route high on Ben Nevis on April 12. (Photo Crag Jones)

Hopes for good late season conditions were thwarted by another major thaw in March. By way of compensation, a heavy snowfall in the Cairngorms followed by a helpful thaw-freeze cycle brought the easier north-facing gullies into condition and several teams enjoyed romping up the easier classics in the Northern Corries.

Across on the West conditions were leaner. The most popular technical route on the Ben was Gardyloo Gully, which provided a sporting Grade III. In many ways, extremely lean conditions are the best time to climb this classic route as it is often blocked by a monstrous cornice. Ascents were also made of Glover’s Chimney, Central Gully Right-Hand and Tower Scoop. A strong French team backed off the third pitch of Point Five Gully.

The most eye-catching climb was a very thin looking Smith’s Route by Crag Jones on April 12. “The brave second was Andy Bunnage,” Crag explained. “He was lashed under the roof, in case the whole caboodle came down. It was that thin – the icicle was very hollow!”

To maintain the winter psyche until next season (just six months away), Robert Taylor has put together a set of podcasts interviewing current activists about their Scottish winter and mountaineering exploits. So far Robert has interviewed Simon Yearsley, Helen Rennard, Robbie Phillips and myself. Paul Diffley of Hot Aches Productions has also very kindly made available the full audio of his interview with Jimmy Marshall.

Robert has a good flowing style and the topics range from Robbie talking about seconding Greg Boswell on Anubis to Helen revealing Andy Nisbet’s caramel shortbread habit. Robert has plans for many more interviews, so listen in to Vertical Voice – Stories from the Steep at: