A Little Line on Nevis 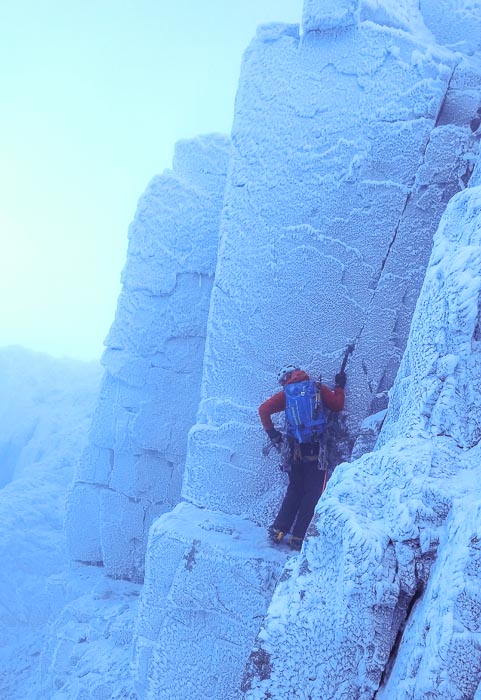 Simon Watchman leading The Cherry on Top Finish (III,5) to MVG on Number Three Gully Buttress. This two-pitch route was climbed at the beginning of January and offers a useful option when conditions on the mountain are very thin. (Photo Toby Archer)

The title of this post comes from an email that Toby Archer sent to me last week regarding a possible new line on the left wall of Number Three Gully climbed on January 4 when conditions all over the Highlands were extremely lean. “I was climbing on the Ben with my friend Simon Watchman,” Toby wrote. “Our Plan A (following Chasing the Ephemeral of course!) was Number Three Gully Buttress, but conditions were very bare at the base of the buttress and visibility really poor, so we couldn’t see an obvious way to get up the steep rock to the platform where the route starts traversing up and rightwards.

Instead we carried on up Number Three Gully towards the plateau. We went past Gargoyle Wall and Winter Chimney, but not too far beyond them noticed a chimney/thin gully line also on the left. Having dragged all the climbing kit up there, this seemed like a quick target to do some ‘proper climbing’, rather than just continuing to plod up Number Three. I led the chimney-groove in about 50 metres of III,4 to more open slopes not far below the plateau. It would have been possible from there to just climb easy snow onto the top, but Simon climbed a short but fine corner-line in small buttress above. That pitch was about another 15 metres, with the corner itself being fun and well protected climbing at about III,5 although, as I said, completely avoidable!

The only thing in the guidebook around there is El Nino, but that description didn’t fit what we climbed at all. In ‘average conditions’ I’m sure the upper buttress that Simon led may well be hidden by the cornice, and the main pitch that I led is likely to disappear below the snow build up as well, plus I’m sure it has been climbed before so this isn’t a new route claim. But for early season, or after a very big thaw, the line might be worth mentioning as a possible route for those of us who think Gargoyle Wall and its neighbours are rather too intimidating looking! If you or any readers of scottishwinter.com have any idea of what we climbed I’d be very interested!”

Subsequent correspondence with Toby revealed that the first pitch of their line was the same as MVG (III) that was first recorded by Robin Clothier and Andy Forsyth in October 2012. The second pitch may well be new however, and if so, Toby and Simon would like to call it the Cherry on Top Finish (III,5). “The route was the cherry on top of a great day out,” Toby explained. “We had the wonderful cloud inversion on the summit – it was a sweet little route on top of the frosted cake of Number Three Gully Buttress!”