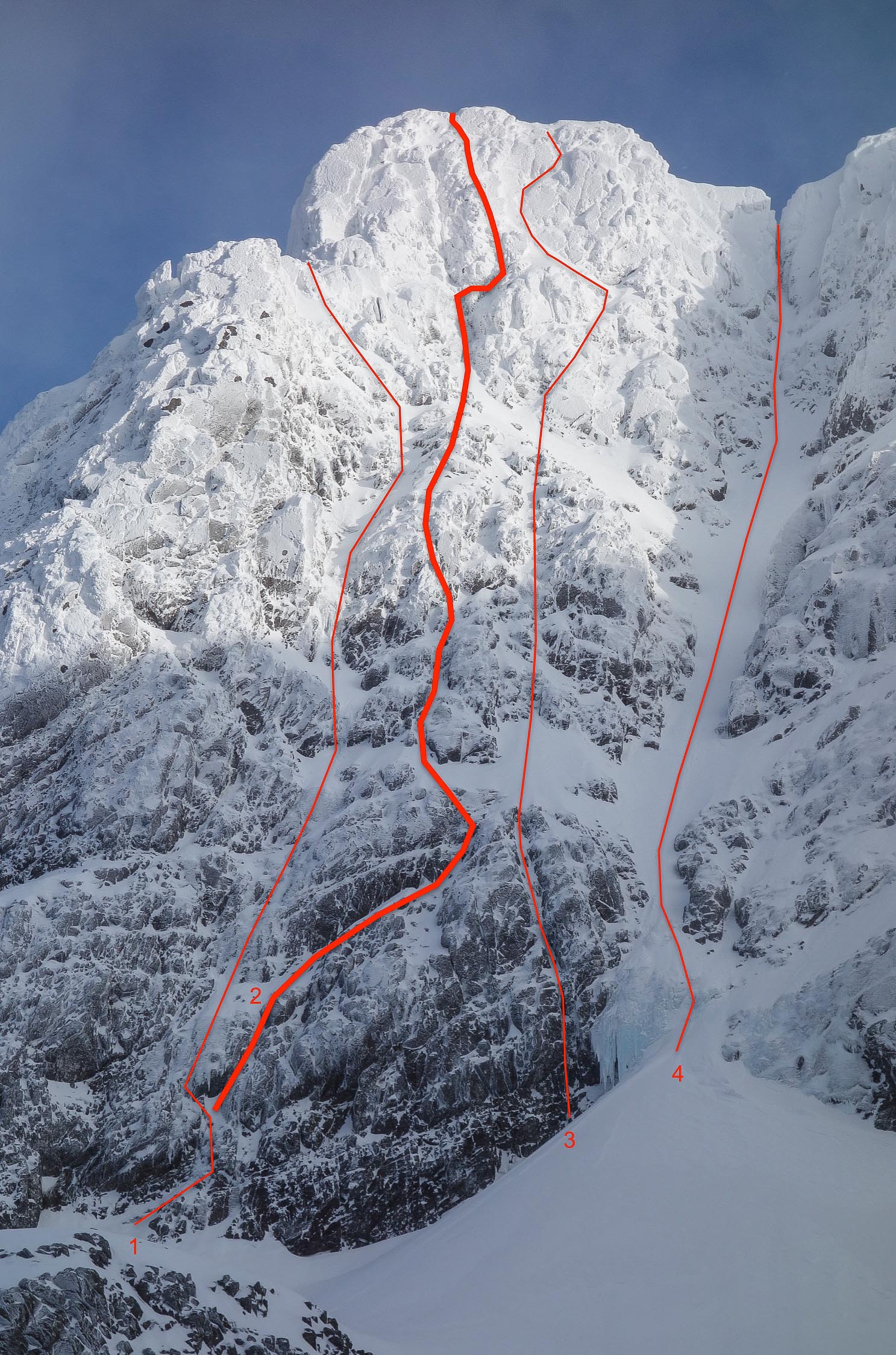 For me, the beautiful proportions of Pinnacle Buttress of the Tower makes it one of the most alluring features on Ben Nevis. So much so, that I’ve climbed seven routes on its crest and flanks, but in my focus to unravel its secrets I had ignored the subsidiary buttress to its right. This area was first explored by Donald Bennet and R.Tait in November 1957 by a Grade III line that traverses in from Broad Gully a long way left. The buttress was finally climbed in its entirety by Rab Carrington and Brian Hall in March 1976 by a route called Pinnacle Buttress Right-Hand (IV,4). I’m not sure if the route has ever been repeated in its entirety, as the initial start left of the icefall of Glover’s Chimney is extremely steep and rarely forms, although it is possible to avoid this section by coming in from Glover’s itself. The first ascent description is very brief, but it is likely that Rab and Brian finished up the final section of the Western Traverse on the Great Tower.

Robin Clothier and George Armstrong were the first to climb the prominent ice line dividing PBOT and its subsidiary buttress in March 1989. Pinnacle Buttress Direct (V,5) is a very fine climb and sees a number of ascents nowadays, but between the Direct and Right-Hand lie another series of grooves, and these were the focus of Sophie Grace Chappell and I on March 20. The problem is how the gain the grooves as the lower section of the buttress is undercut. As it happens, the lower section of the Pinnacle Buttress Direct icefall divides, and the right-hand branch leads to a hanging terrace cutting across the face. This proved to be the key, and led to excellent and surprisingly independent climbing up the grooves above. After three long pitches we were under the snow slopes leading up to the steep headwall on the western side of the Great Tower.

The beautifully white rimed headwall looked too good to miss, so we started up the initial section of Rotten Chimney, and made the awkward right step of the Western Traverse to gain the hanging corner slicing straight up the centre of the wall. The climbing was steep, but fortunately there was good ice beneath the deep rime. As always there was a trade off however, and protection and belays were difficult to find.

After six long pitches (and a false start walking up to a route in Observatory Gully earlier in the morning), time was getting on. Dusk was falling as we scampered across Tower Gap and headed up the final crest of Tower Ridge to the plateau. In keeping with the nightclub theme on PBOT (Stringfellow and Goodfellas) we called our climb Moulin Rouge. It felt VI,6 on the day, but in less icy conditions it may be a little more friendly. Having said that, any route that tackles the 250m-high west flank of the Great Tower is a meaty undertaking and I suspect that Rab and Brian’s Pinnacle Buttress Right-Hand is a notch intergraded!