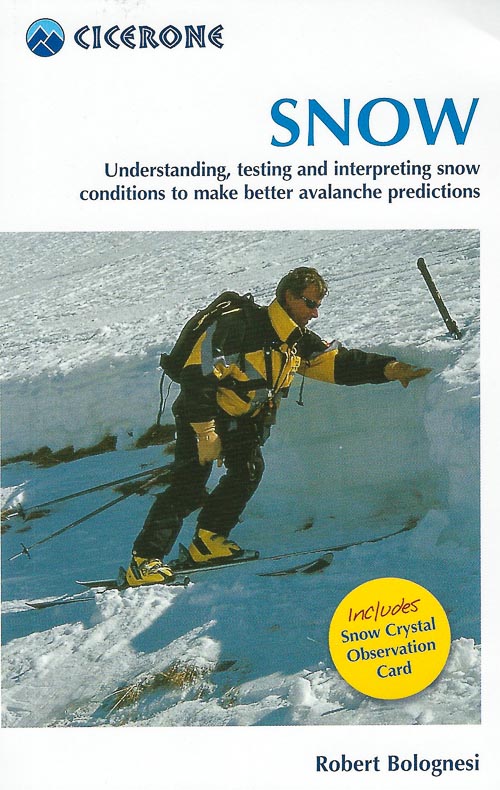 Snow by Robert Bolognesi is aimed at climbers and skiers who want to understand snow and its properties and how it can lead to avalanches. The book was first published in English by Cicerone in 2007.

After January’s heavy snowfalls, and with more cold weather on the way, it is an appropriate time to review this useful little booklet written by Robert Bolognesi, an avalanche specialist working in Switzerland. The book was first published in France in 2002 and later translated by Blyth Wright and re-issued by Cicerone five years later.

The book sets out to answer a series of simple questions. What is snow? How is it formed? How does it change? Where and when is it dangerous? Bolognesi explains how snow crystals form in the atmosphere, and how they change over time once they are on the ground. He then goes on to describe how these changes affect the snow and determine its physical properties, particularly cohesion. As snow pack is made up layers, the stability of the complete structure is explained. This fundamental understanding can then be combined with weather forecasts, snow profiles and stability tests to assess avalanche risk.

There will be little new here for the seasoned avalanche expert, but Bolognsei presents his subject in a simple and structured way which will enhance the understanding for all who venture into Scotland’s winter mountains. He also makes the point that the properties of snow alone are not the only components that cause avalanches, and topography makes a huge difference too.

The Scottish Avalanche Information Service do a magnificent job in highlighting avalanche danger across the Scottish mountains however they can only accurately predict the six main areas they cover (North Cairngorms, South Cairngorms, Glen Coe, Lochaber, Creag Meagaidh and Torridon). This book will help climbers and skiers fill in the gaps.

Snow is part of a series published by Cicerone that incudes the sister book Avalanche! (Robert Bolognesi, 2007) and First Aid and Wilderness information (Jim Duff and Ross Anderson, 2017).