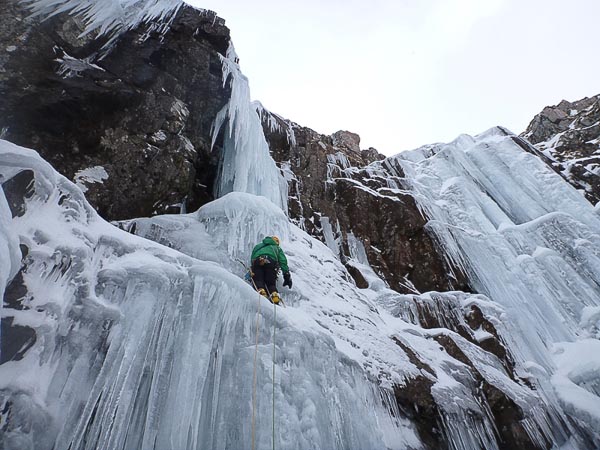 “Chris Pasteur and I made a quick dash into Eilde Canyon on March 27, inspired by tales of ice-encrusted Glen Coe,” Simon Yearsley writes. “The canyon was in superb condition, with some of the icefalls we’d seen part-formed in previous years looking very climbable. We were fairly short of time (we had to get back to Perth at a sensible time), so we walked into the base of the canyon and nipped up the right-hand sister line of ‘El Mini’ which gave ‘El Micro’ (III) – possibly the shortest recorded ice route at a massive 8m… but worth recording as it is really obvious and well-positioned in the canyon.

We then walked up the Grotto Icefalls area where ‘Hongos’ looked in superb condition. This had been climbed in January 2011 by Simon Davidson and Neil Carnegie, and looked far too tempting to walk past. It gave a superb 30m of steep ice, which definitely merited the technical grade of 5. I’m beginning to think that overall grades are a bit irrelevant in Eilde, as most of the routes are single pitch ice lines with usually 25 to 40m of continuous ice, so it’s probably more relevant to focus on the technical grade and then describe any significant issues to do with sustainability in the description. Anyway, after the repeat of Hongos we were keen to see what the centrepiece of the canyon – ‘The Three Amigos’ – were looking like. They are the impressive vertical ice pillars on the western side of the canyon, the central one we climbed in the first wave of the Eilde exploration in December 2010, but as far as I was aware, the left and right-hand were still unclimbed. Until now that was! We chose ‘Left Hand Amigo’, as it looked the steepest, and it certainly was… an initial vertical 4m wall, then a slabby section to a rest under the imposing headwall. I must admit to hanging around for quite a long time, summoning the courage to launch onto the steep upper section. A good screw placement, a deep breath, a quick shout of ‘OK, watch me here, Chris’ (shouted as casually as I could of course…) and then up I went. Chris’s belaying was spot on, despite being distracted by a wee scuttling mouse that was ploughing furrows under the snow all around him… obviously hungry! Anyway, back on the route, the plumb vertical section went on for what seemed like ages (in reality about 5m), then the angle kicked back to 85 degrees for a several metres before a gradual easing towards the top. It was a beautiful and superb pitch, with the ice pretty amenable and chewy. For its technical grade we thought very very very top end 5, or more realistically tech 6.

We popped back to the abseil to retrieve our sacks, but I couldn’t resist a quick solo up the easier angle ice-flow opposite the abseil point to give ‘Raton Rapido’ (II), named in honour of the scuttling mouse.

It was great to get Eilde canyon in such good conditions, and pleasing that its’ not just a product of the ‘uber-winter ‘ of 2010/11. We weren’t able to get out for a few more days, but knowing the canyon was in good condition and the weather should be cold enough for three or four more days at least, we did do the selfless act of posting on UKC about how good the conditions were. Neil Carnegie and Scott Elliot saw the post and nipped in on March 30 and repeated Central Amigo, enjoying the steep climbing on good plastic ice and finding it quite ‘goey’ for the grade. They finished by climbing the last of the remaining 3 Amigos: Right Hand Amigo. This went at about the same technical grade as the other centre-piece pillars, i.e. very top end tech 5, or tech 6. It gave another excellent quality steep ice route which Neil described as ‘a really good steep pillar, after a cracking and very featured groove lower down. Really nice to climb fresh ice for a change!’

With the warmer weather upon us, Eilde is off the agenda now, but it does remain an excellent and easy accessible pure ice venue. It requires a good freeze, but is pretty resistant to thaws, and may well be in condition fairly often – probably a good indicator is Beinn Udlaidh… if Udlaidh is ‘in’, then Eilde Canyon is worth a visit! I’ve updated the topo to show the new lines done this winter, plus to update the grading to just technical grades. The topo is available to download at http://www.bigtreecampervans.com/eilde-canyon.”