If At First You Don’t Succeed…

Posted on February 15, 2012 by Simon Richardson 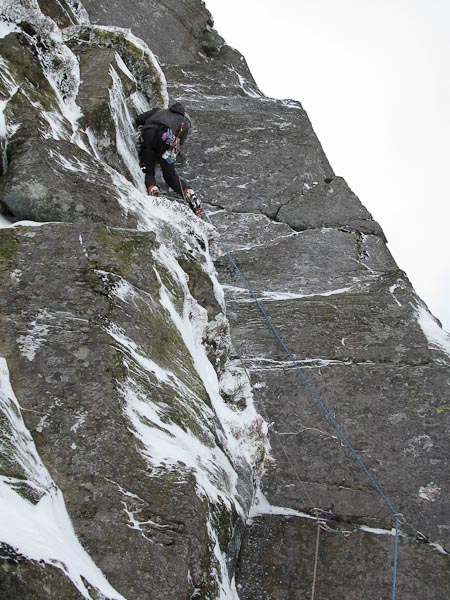 Roger Everett climbing the first pitch of Waterfall Buttress Direct (VI,7) in Winter Corrie, Glen Clova. Due to a combination of unhelpful conditions and difficult weather, this short technical route only yielded on the fourth attempt. (Photo Simon Richardson)

With a brief warming on Saturday and a better weather forecast for the east, Lochnagar was the obvious choice on Sunday February 5. Roger Everett and I were a little concerned about the amount of snow that may have fallen on Saturday, so we changed our plans at the last minute for Glen Clova.

Our plan was to lay an old ghost of mine to rest in Winter Corrie. High up on the left side of The Waterfall is a steep buttress that has an attractive corner and crack line running up its centre. I tried it in December 2004 with Ian Parnell, but although it was frozen the wall was completely black. We scuttled off and climbed ice that day instead, but when I returned a couple of weeks later with Chris Cartwright the route was completely white, but under the layer of snow it was unfrozen.

Chris and I returned a month later, and this time had the perfect conditions – the buttress was white and the turf was frozen, but once again the weather gods were not on our side. The wind was gusting so strongly that I was unable to make the crux move pulling into the final overhung niche without fear of being blown off, so once again we retreated.

This time with Roger the route was frozen and the grooves white with new snow, and I was very relieved to finally succeed on Waterfall Buttress Direct (VI,7). It was still mid afternoon with time for a second route, so I suggested to Roger that we traversed across to the neighbouring Corrie Farchal and climb a route there. By the time we started climbing it was past 3pm, and there was a little tension in the air as we had no idea about how difficult the ground would be above.

Roger led a thin ice smear through the lower bounding slabs, and then we continued for another couple of pitches to underneath a barrier headwall. Roger jokingly pointed me towards an imposing offwidth that was rather reminiscent of Elder Crack on Curbar, but I outsmarted this by finding a hidden gully on the left that ended in a cul de sac with an icicle running down its back. Roger dealt successfully with icicle and then ramps and grooves led to the final snow slopes just as the sun began to set in the West. Elder Crack Buttress may only have been a lowly III,4, but in many ways the spontaneity and uncertainty of our ascent made it a more fulfilling experience than grinding out our more technical buttress route earlier in the day.