Posted on February 14, 2012 by Simon Richardson 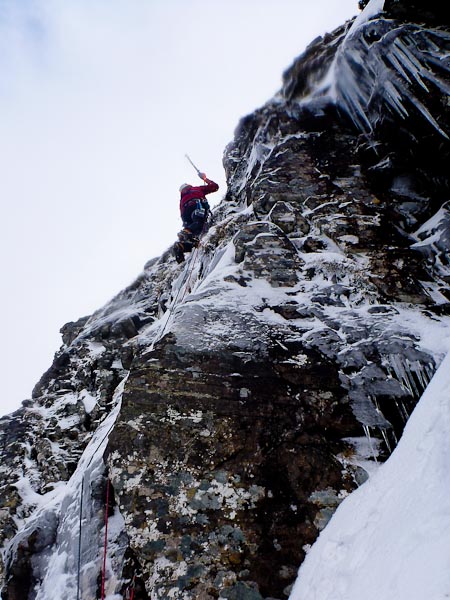 Martin Hind leading pitch 4 of Roseroot (V,5), a new 300m-long route in the Fannaichs. Martin described it afterwards as a “a big rambling route with the occasional ice pitch thrown in.” (Photo James Edwards)

After adding two routes last season, Martin Hind has continued his exploration of Creag Dubh a’Gorm Lochain by making the first ascent of Roseroot (V,5) with James Edwards on February 5. This remote crag deep in the Fannaichs is shrouded in mystery and would appear to be marked only on the very best of maps.

“The route was a bit of a mountaineering ramble with steep sections going through weaknesses in rock bands,” Martin explained. “It was quite alpine in nature, but unfortunately the corrie doesn’t appear to have consistent conditions with the ice not appearing in sufficient quantities all the time. It depends on the build up of snow on the upper slope which also adds spice if there are avalanche conditions. There was avalanche debris along the bottom below Gormless Gully (my name as it doesn’t appear to have been recorded before), which is the big easy gully going diagonally up and right to a shoulder. The routes will not be in the modern idiom but more of an exploration with lines not very well defined linking ice pitches with easier Grade 2 snow slopes between.”

Sounds interesting. No doubt Martin will keep us updated on further exploration as the season progresses.

Simon Richardson is a passionate Scottish winter climber
View all posts by Simon Richardson →
This entry was posted in New Routes and tagged James Edwards, Martin Hind, The Fannaichs. Bookmark the permalink.