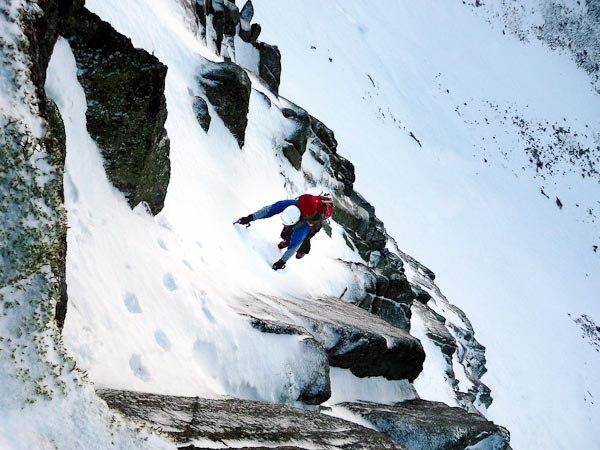 Duncan Tunstall on the first ascent of Left Wing Extremist (III) on Garbh Choire Mor. Over the past week, Andy Nisbet has added two routes to this ever-reliable corrie that cuts deep into the Braeriach plateau. (Photo Andy Nisbet)

Last week’s thaw has meant that new route possibilities have been rather thin on the ground recently (pardon the pun). Cairn Gorm in particular suffered badly in the warm temperatures, but Garbh Choire Moir on Braeriach can usually be relied upon to provide good conditions, even when other places are lean.

Andy Nisbet has made a couple of visits recently, so I’ll let him take up the story:

“Having seen a very bare Northern Corries on January 8, the best looking option for the next day was the snowiest, Garbh Choire Mor of Braeriach. I didn’t feel I could ask anyone else to make the long trip on spec, so headed off light and solo. Heading up the west slopes of Braeriach, all was as bare as Cairn Gorm but once I looked into the Garbh Choire I couldn’t believe how much snow there was.

My imagination increased the cornices to giant size, so I headed over to West Buttress in the Lower Corrie where the light was angled best for showing a gap. The right side of the buttress hadn’t been climbed and started with a deep slanting chimney with a thin strip of white. It looked way too hard to solo but it didn’t cost me anything to look and surprisingly it leaned back across the slope and was full of snow-ice. After that, easier slopes led to a steep top band which again had an icy break leading towards the cornice break. West Buttress Right Edge (Grade II) seemed an appropriate name for a traditional route.

The day had felt a huge effort and I found out why when I woke the next day with a streaming nose. Five days later I was just about better and little more snow had fallen. This time I knew there were conditions so asked Duncan Tunstall if he was interested in another visit. A summer picture showed a few possibilities but looking down into the corrie on a lovely day, they looked trivial. So it was back to the West Buttress to hope there was another line tucked in to its left edge. Snow conditions were now so good that a line of grooves proved easy and led up towards an older route. So we jinked left to an attractive looking icy groove which proved a bit tricky but finished suddenly on the final slopes and another cornice break.

It was such a gorgeous day that it was tempting to nip back down to Phoenix Gully, which was looking in fine nick, but common sense sent us back to the bikes and back to the road in daylight. The only naming snag was that we had climbed a route left of West Buttress Left Edge, so Left Wing Extremist (Grade III) came into being.”