All Alone on Aonach Dubh

Posted on December 7, 2011 by Simon Richardson 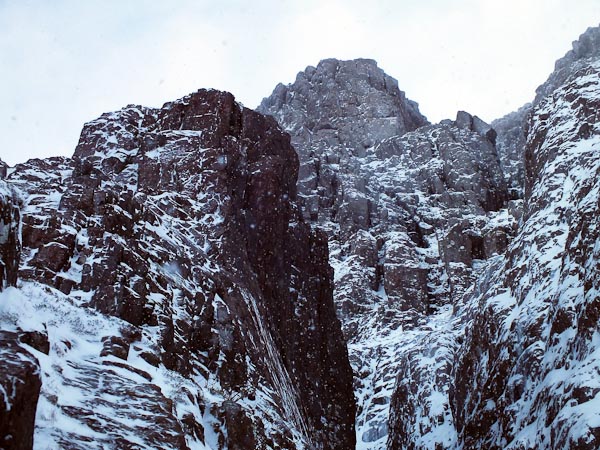 Looking up Number 3 Gully Rib (II/III) on the West Face of Aonach Dubh. The route follows the snowed up rock on the left side of the picture with the deep Number 3 Gully on the right. Climbing solo, James Roddie made the first winter ascent of this natural winter line on December 5. (Photo James Roddie)

James Roddie has been exploring the crags of Glen Coe for a couple of years now, often as bold solo outings. His latest adventure was on Monday December 5, when he made the first ascent of Number 3 Gully Rib (II/III) on the West Face of Aonach Dubh. James takes up the story:

“Given the westerly winds, I knew that a buttress route on a West face would be likely to give good climbing and frozen turf, so I headed up underneath B Buttress on the West face of Aonach Dubh. It’s a rarely visited area of Glencoe in the winter, void of crampon scratches and still with potential for more new routes. I’d been up a summer route here before a few times but I couldn’t find any record of it as a winter route so I thought it well worthwhile a look.

At the base of The Pinnacle Face you break right at the level of the Middle Ledge onto a rib running up the left hand side of Number 3 Gully. There was plenty of fresh powder around but lots of frozen turf. I took the rib as directly as possible, with a few awkward moves on the steeper sections as the rock type doesn’t give many cracks or great hooks. I climbed a final narrow chimney and topped out to the Upper Rake just as very heavy snow started to fall. The traverse across the top of Number 2 Gully, to escape the face, was quite spicy on soft snow.”

Simon Richardson is a passionate Scottish winter climber
View all posts by Simon Richardson →
This entry was posted in New Routes and tagged Glen Coe, James Roddie. Bookmark the permalink.

One Response to All Alone on Aonach Dubh