Posted on February 18, 2011 by Simon Richardson 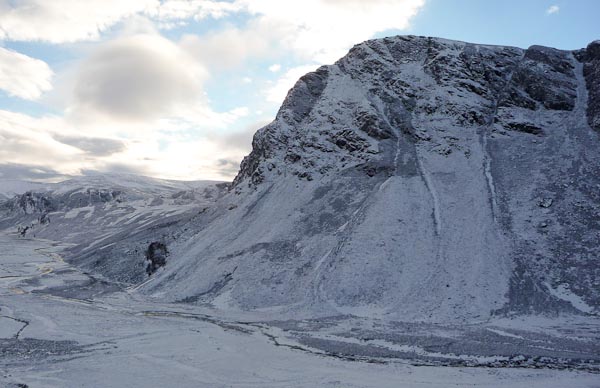 The north side of Craig Maskeldie in Glen Esk. The new addition Logue’s Direct (V,6) is a direct version of Shaula Ridge, the prominent buttress on the right. The left skyline is Maskeldie Buttress bounded by Lee Gully on the right. The gullies either side of Shaua Ridge are Dochty Gully and Unich Gully. (Archive Photo Duncan Tunstall)

Duncan Tunstall has continued to explore the cliffs of Glen Esk on the south-east side of the Cairngorms. On Tuesday February 15 he teamed up with Stephen Venables to straighten out last year’s addition Shaula Ridge (III,5) on the north side of Craig Maskeldie.

“Stephen was lecturing in Newcastle so we chose an early start for a day out on Lochnagar,” Duncan told me. “Alas the road was closed due to snow, so our meeting was rapidly rearranged to Glen Esk, the only hill reachable by us both, albiet still a risk as we have hardly had a cold February.”

Things started to look up when the pair got a lift in an estate Landrover and despite the cliffs above Carlochy being completely black, the north side of Craig Maskeldie was wintery.

“This gave us one obvious option,” Duncan explained. “Straightening out Shaula Ridge by climbing the lower central ridge that had been by-passed by the easy ground in the centre of the crag on the first ascent. This gave three new pitches, of which the second is well worth a visit, and now the last pitch provides an excellent conclusion rather than a sting in the tail. Who knows, it might even get a repeat! We felt it was worth a new name and chose Logue’s Direct and gave it V,6 – and a far better addition to that side of the glen than the previous line.”